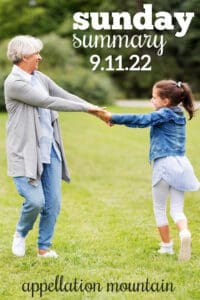 I’m surprised at how intensely I’m feeling the loss. I’m not an Anglophile, but I guess I’m a bit of a royal watcher. As the news broke, I was flooded with texts from friends who I’d never have expected to take notice of the news.

Something that came to me: these are the moments when we truly feel honor names.

A whole generation, few of whom will remember her. (Her eldest namesake, Princess Charlotte, is just 7 years old.) But every time their names are discussed, forevermore, the connection to their legendary grandmother will be remembered.

I seem to be name-spotting triplet boys lately! Loving this trio: Sky, River, Bay. They joined brothers Marcus, James, Christian, and Max. Could I name three boys at once? That feels like SUCH a challenge, doesn’t it? But I love the way all three are nature-inspired, while still sounding distinctive.

Names that are so similar … and yet so different. This list from Swistle is packed with close-but-totally-different pairs like Everly and Beverly, Bruce and Bryce. No deep thoughts here, just fun to ponder …

Speaking of fun, have you noticed the ads for new Hulu docuseries Welcome to Wrexham? It’s about the takeover of a football club by actors Ryan Reynolds and Rob McElhenney. The posters credit the series’ co-creators as Wryan Reynolds and Wrob McElhenney. Groan, I know … but I do love a subtle detail like that.

I’m collecting a long list of names that could be boosted by upcoming movies/television series and other events: Cassian (Andor on Disney+), Enola (the second Enola Holmes movie on Netflix), Matilda (the new Matilda movie coming out at Christmas), Asha (new Disney movie Wish due in late 2023), the newly released House of the Dragon and Rings of Power. Other Star Wars-related series, of which there are many? The list is in my head … clearly I need to write it down! And, of course, The Crown returns in November of 2022. Combined with the queen’s recent passing, could we see an uptick in the use of Elizabeth?

Nancy has more name quotes out. Always a treasure trove! The story about Dinah especially … and the French versus North American perspective on names, too … Read them all here.