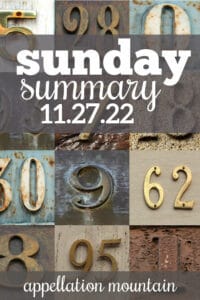 A reader asked a fascinating question a while back.

Yes, she agreed. Fewer children receive the most popular names.

But we know SO many more people. Doesn’t that offset the decline in a name’s absolute popularity?

My reply: not really.

And that’s because of Dunbar’s Number.

To follow her (excellent) argument: maybe back in the day, you lived in a village. You knew your extended family, and your neighbors, their neighbors, and the people you traded with at the market or bought from in shops.

But it was, necessarily, a very small world with a finite set of names.

Now we can keep in touch with our childhood friends and old college roommates, colleagues from our first job, friends we remember from summer camp or a sports team. Our cousins from the other side of the country or the world. To say nothing of all the celebrities and athletes whose lives are constantly in the spotlight; keeping up with them is an effortless as glancing at our wrists.

If we know – or at least know of – more people, it stands to reason that we’d know more Liams and Olivias, right?

But I suspect we don’t actually know more people.

Dunbar’s Number explains that human beings can only really maintain relationships with about 150 people. It’s a ratio between brain size and group size, a number that has more to do with our hard-wiring as human beings than the tools available to us.

The anthropologist who came up with the idea, Robin Dunbar, goes on to explain that there are additional layers, both larger and smaller – 15 good friends. 50 friends. 500 acquaintances. 1500 people you recognize.

Think of it this way: you run out to buy a present, because you’re going to a first birthday party for your friend Allison’s son, Henry, tomorrow. Henry’s mom is in your 50. Maybe even your 15.

While you’re shopping, you run into an old classmate, who excitedly tells you about their new baby, Juniper. You gush over the pictures on her phone and make vague plans to maybe meet up soon. Juniper’s mom is in your 150.

Later that day, you get a text from your mom, announcing that second cousin Bryce’s wife had their baby. It’s a boy named Nolan! You haven’t seen Bryce since that family reunion when you were seven, and you’ve never met his wife. Nolan’s dad is in your 500.

That night, you see a post on Instagram about Hadley’s first day of kindergarten. It’s from a former colleague. You hit like, but are a little surprised – did you even know that she’d had a baby? Hadley’s mom is in your 1500.

If you’re name-aware (and if you’re reading this, you probably are), you’re cataloging every one of those names. But it’s only Henry that you’re guaranteed to remember. And if you find yourself expecting a son in the near future? There’s a good chance that it’s only the name Henry that you’ll feel motivated to avoid.

So yes, the Internet of it all makes us far more aware of names, and likely to encounter them, too.

But it hasn’t changed our relationships as significantly as we might think. Which means that we might be able to rattle off a few more Liams if we really think about it, but it doesn’t truly offset the name’s relative decline in popularity.

Or so I suspect.

Because, of course, if you’re set on a truly stand-out kind of name, then yes – learning that your brother’s college roommate just had a baby named Meridian might strike that name from your list, even if you’ll probably never see them in real life.

I love these names: Archer Banks and Ace McCord, twin boys joining big sister Avalon. Avalon is one of my all-time favorites; Archer, too, I think. They’re the children of TLC reality series Sisters Wives star Mykelti Brown and her husband Tony Padron. Also: did you know that Sister Wives is up to 17 seasons?! And if you’re counting, the twins are the fourth and fifth grandchildren for the mega-family.

This is downright fascinating; a fictional flight attendant changed the way we spell girls’ names. Really! Check out Laura’s post about Vicki Barr. My Baby Boomer mom never mentioned these novels, but I know that a similar series influenced her career choice. (Cherry Ames was a fictional student nurse, but author Helen Wells created both series.) I think books play less of a role in naming today, but there’s no question that a different media landscape gave more weight to fictional characters’ names as sources of inspiration – and the numbers demonstrate that Vicki is a truly remarkable example.

Hmmm … how would you pronounce Beatrix and Lois? I’m not wildly surprised that this parent is frustrated at having to explain how to pronounce Beatrix. But rhyming Lois with Joyce? I didn’t expect that. Still, unless you choose names like Elizabeth, Emma, and Mary, the occasional pronunciation hassle feels inevitable.

Clare lists British names American parents should steal. Love this entire category, and I’m very ready to meet some new babies named Blossom, Barnaby, Una, Edie, Rufus, or Jago. Or all of the above!

While we’re in the UK, can we talk about Kester? The name appears in a recent British Baby Names birth announcement round-up: Kester Francis. While it can have surname roots, it’s also an old school Christopher nickname, all but forgotten. I like it for a daughter or a son. 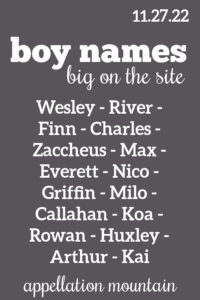 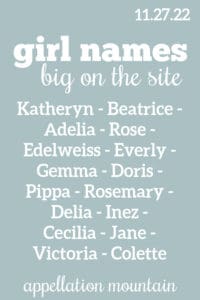