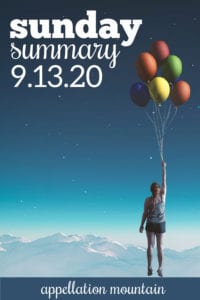 Maybe it’s because floating weightless above the earth sounds ideal right now. He talked about capturing the childlike wonder of floating away, clutching a fistful of balloons. Maybe I didn’t pay enough attention in science class, but I always thought it might be possible, given the right number of balloons.

Turns out that, given enough people who paid very close attention in science class, it’s possible to fly like they did in Up.

As with so many things, I first found myself watching Ascension because I wanted to learn his daughter’s name.

Ascension looks effortless, but there’s actually a lot of structure behind it. I think it’s good to remember that names are often the same. We hear the sounds and the syllables, but we can’t possibly hear the story that framed the decision.

For that, you’ll have to ask.

Have you heard that Netflix is adapting the musical version of Matilda? I’ve been waiting for something to spark this name’s rise. A 2021 release might just be it … though maybe 2022?

A brilliant baby name formula, courtesy of Katy and Ed: Take a relatively popular, mainstream first and pair it with a wild, unexpected middle. Daisy Dove and Lyra Antarctica both fit this model. You might argue that Lyra is more out-there than Daisy, and that’s true. But in an age of Luna/Lyla/Lily, I’m not sure it’s a sharp departure. In any case, popular + whoa! is a great naming strategy for those of us without Grammy Awards, too.

And now … back to the popularity data. Because Nancy released the Pop Culture Baby Names results, and I’m so here for it. The big winners? Alita and Banks, Posie and Psalm.

Fascinating look at names that left the US Top 1000 after years – really YEARS – in the rankings. I can’t get over Claudia!

Let’s end with the annual Playground Analysis. Because nevermind Liam + Olivia. When Kelli tallies all those spellings, the real #1s are (still) Jackson and Sophia. 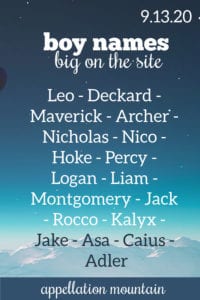 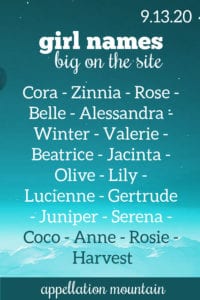