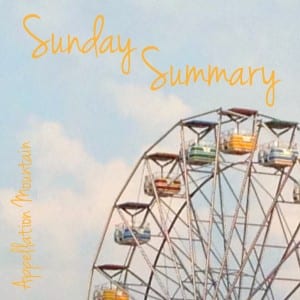 Maybe it’s because my kids had their last day of school on Wednesday.

Or maybe it’s because we’ve front-loaded all sorts of summery stuff into our June: a quick trip to the beach, an outing to an amusement park. (Note to self: next time check and make sure the roller coaster you’ve just agreed to ride with your ten year old does not dangle you upside down with only harness between you and the earth below before you are strapped in.)

So let’s start with a round-up of summery baby name posts. I’m guessing we’ll see more new ones around the official start of summer, but there are plenty in the archives:

How cool is it that Thalassa makes all three posts? And how crazy is it that I’ve never written about Thalassa as a Baby Name of the Day? Especially given my love for names starting with Th! We’ll fix that in July.

Which reminds me, I’m a little short on July feature names, so please feel free to leave suggestions in the comments of this post!

Now, on to the general baby name news: