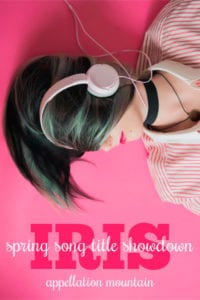 Our Spring Song Title Showdown has come to a conclusion, and we have a winner.

And get this: just three votes put the winning name over the top.

WHAT’S ALL THIS ABOUT?

A few weeks ago, we started working our way through sixteen girl names, all drawn from song titles. Clearly, we could’ve stared with dozens upon dozens of names. These sixteen represent some of the best-known songs. And, in many cases, there are either multiple songs around the same name (hello, Valerie and Ruby), or the song itself inspired the use of the name (Rhiannon, I’m looking at you).

Your votes narrowed the list from sixteen to eight to four to just two. And now, you’ve picked a winner!

LUCY IS OUR FIRST RUNNER-UP

With just under 50% of the vote, Lucy becomes our runner-up.

Somewhere between vintage and classic time-tested Lucy brings to mind The Beatles’ chart-topping “Lucy in the Sky with Diamonds.” The song’s name was inspired by a real-life Lucy, a classmate of John Lennon’s young son Julian.

Kenny Rogers recorded “Lucille,” but no question the Beatles’ hit is the most famous of the Lucy songs.

But it’s “Iris” that carries the day, and earns the title of Spring Song Showdown Champ!

The Goo Goo Dolls’ hit was recorded for 1998 movie “City of Angels.” There’s no Iris in the movie. Nicolas Cage plays Seth, who falls in love with Meg Ryan’s Maggie. The name Iris was inspired by country-folk singer Iris DeMent. Despite a long career and two Grammy nominations, you may not have heard of DeMent. Goo Goo Dolls’ lead singer Johnny Rzeznik spotted her name. The rest is music history.

Iris started out as the goddess of the rainbow in Roman myth, a messenger between the heavens and the mortal realm. It’s since become the name of a blue-violet flower and color, too. Both factors have contributed to the name’s use over the years. But it’s actually more popular today than ever before.

And, sure enough, it’s down to the Dolls’ chart-topping single.

The came the movie, which performed modestly. And the song – which has been the far bigger, and more enduring, hit.

Iris climbed almost every year since, reaching the US Top 200 by 2016. One factor? “Iris” has become a popular wedding song. If your first dance is to “Iris,” it’s easy to imagine it might make it to your short list of girl names.

Or not. Maybe the name’s spare style, ecovintage status, and mythological appeal just plain make this a favorite.

It certainly was for this spring’s contest!

Thanks to everyone who voted! I hope it was a little bit of a distraction during the midst of shutdowns and such. Hoping you’re all well and hanging in there! Our next contest comes in July, when we vote for our favorite of the new baby names debuting or returning to the US Top 1000. And that data? It’s expected in May – YAY!