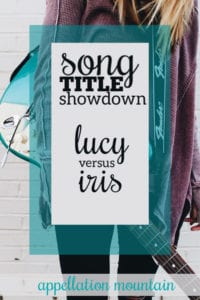 The votes are in, and we’ve narrowed it down to just two final names.

I’m so excited, because the finalists are both great choices – as songs and as names.

They’re also very 2020. Both are short and complete, names that might be called traditional, even vintage. But they’re also perfectly on-trend and at-home in the twenty-first century.

We started with sixteen names. In some cases, they appear in multiple songs. Mary could’ve been The Association, Creedence Clearwater Revival, or Run DMC … but I went with Jimi Hendrix. Other names are clearly tied to a single song. There’s only one “Jolene.”

Votes were encouraged because you loved a name, a song, or some mystical combination of both. Because these contests? Some rounds were tough!

Here’s the complete list, along with the songs that inspired them.

Your votes narrowed it from 16 to eight to just four … and now you’ve done it again, and we’re down to the last two!

It’s always satisfying when the names win do so by a comfortable margin!

Now it’s time to vote for the last time in this contest. The psychedelic 60s Lucy, or the aching 90s ballad Iris? You can vote by the name you prefer, or the song … or some combination of both!

Check back on Tuesday, April 28th to hear how the contest shakes out, and to congratulate the winning name!