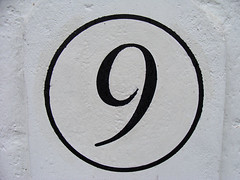 No 9 - black on white by Kirsty Hall via Flickr

Thanks to Kristen of Marginamia for sharing the stories of her daughters’ names.