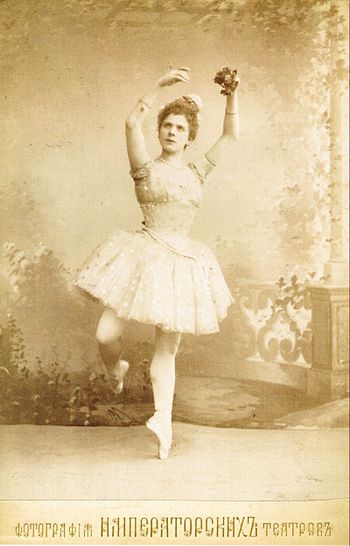 Most classic masculine names have an obvious feminine form – or three.  But how ’bout Peter?

Thanks to Kiri for suggesting one possibility.  Our Baby Name of the Day is Piera.

Actually, there are lots of possible feminine forms of Peter, but none are well used – at least not in American English.

Italian gives us Pietra, as well as Piera, from Pietro and Piero, the masculine forms of Peter.  Since Peter is a major saint, no surprise that they’ve been well used over the years.  Pietro seems to be steadily more popular, in the Middle Ages as well as today – but given the fractured nature of Italian history, I might be missing something.

It appears that Piera is rare, even in Italy.  There’s a place by the name in Catalonia, Spain, and also:

Pierina is the diminutive form of the name, and it has been worn by a handful of notables: legendary ballerina Pierina Legnani.  She danced at La Scala and the Russian Imperial Ballet.  Her additions to Swan Lake remain part of the standard choreography today.  That’s her in the picture above, while she was prima ballerina assoluta in St. Petersburg.

The name shares Peter’s meaning – rock, making this one part-nature name.  But there’s more.  When Jesus says, “I also say to you that you are Peter, and upon this rock I will build my church,” he uses rock to mean steadfast – making Piera something of a subtle virtue name, too.

Haetera piera is a butterfly, better known as the amber phantom – lending another nature reference to the name.

English footballer Joey Barton and partner Georgia McNeil have a daughter called Pieta, which could be yet another spin on Peter – or might be a reference to the famous sculptures of Mary holding the body of Jesus.

Overall, Piera’s strong ‘p’ sound might be a dealbreaker.  But in our age of Penelope and Phoebe, there’s more interest than ever in P names.  If you’re after something truly unusual, with a hint of Italian heritage, Piera might belong on your shortlist.

What do you think of Piera?  And what is your favorite feminine form of Peter?