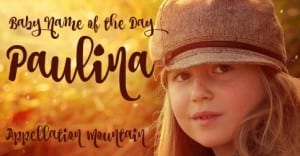 It’s a feminine form of the classic Paul, recently chosen by Mike Myers for his newest arrival.

Celebrity Baby Name Week continues with Paulina as our Baby Name of the Day.

Saint Paul is a major Biblical figure. He’s almost certainly the author of more than half of the New Testament, whose words are still read all around the world today.

No wonder that plenty of children have been named in his honor. Paul was a Top 20 name in the US from 1895 through 1968, and a perpetual Top 100 name until the year 2000. Famous men by the name are plentiful: Cezanne, Revere, McCartney, plus more artists, actors, athletes, politicians, scientists, and more notables.

No surprise that feminine forms of the name abound: 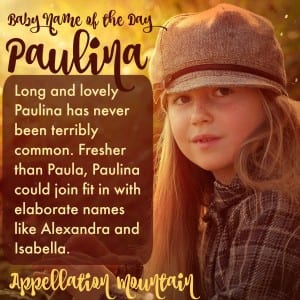 Earlier this year, Vin Diesel named his new daughter Pauline after the late Paul Walker, Diesel’s friend and co-star in The Fast and the Furious franchise. We’ll talk more about that name on Friday.

The couple are daring namers, and Mike has told stories of how they landed on Sunday, inspired by the day of the week, as well as Molly, honoring a family member.

No word yet on the inspiration behind the new arrival’s name, but it’s hard to say if Paulina is a fusty throwback that could only be an honor name – or if it’s perfectly on trend.

My inclination is to call Paulina an underused gem, one that could feel very on trend. Consider:

It makes for a name that feels sophisticated, but not so elegant that it’s hard to imagine a child called Paulina. Easy nicknames include Lina/Lena as well as Polly. And we’ve traded long names for more long names, with Isabella rising as Alexandra falls. Paulina fits right in.

What do you think of Paulina? Does it seem out-of-step or right on trend?