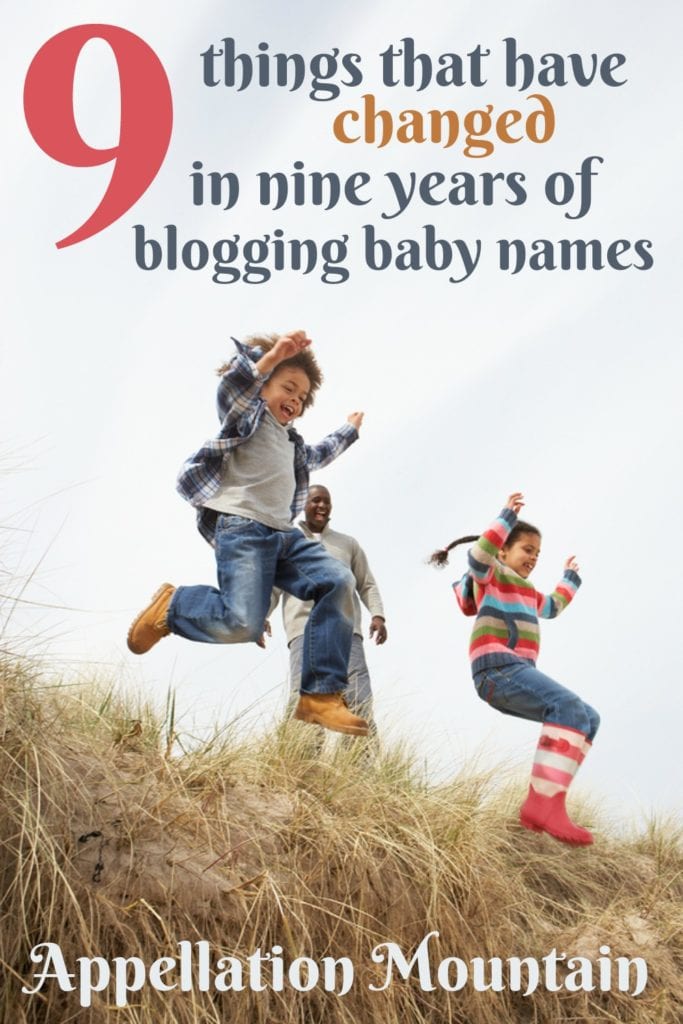 Nine years ago, on January 23, 2008, Appellation Mountain went live. Like many bloggers, I had no master plan or idea. Thanks to a lifelong obsession with baby names, I knew quite a bit about the subject – and because I was alone in a new city, with a toddler for a constant companion and a husband who worked crazy long hours, well … this blog is what happened during nap time.

When I realized the anniversary was approaching, I started thinking about all the things that have changed in naming babies over the last nine years.

Baby names have always been subject to trends. It’s easy to catch the big headlines – Miley rocketing up the charts, and falling just as fast. Game of Thrones inspiring parents to name their daughter Khaleesi. But we miss the macro level shifts – the ones that are part of the evolution of culture and language.

Looking back from today to January 2008, here are the nine ways baby naming has transformed over the last nine years.

For generations, American parents played it safe with boy names, saving the innovations for girls. But ever since Aiden, Jayden, and company took over the playgrounds, that’s changed. Welcome, Jaxson, Ryder, and Kyson. The sounds are conventionally masculine, but the names are novel.

But the rise of creative names proves little. The mid-1990s also brought the slow but steady rise of Noah. Names ending in ‘a’ once were reserved for girls – but now the name topping boys’ popularity lists does, too. And while ‘o’ ending names tend to be masculine, few were considered mainstream.

After decades of men answering to Mike and Bill and Bob, Todd and Josh and Ben, classrooms filled with boys called Sebastian and Arlo and Jax seem sharply different.

Conventional wisdom once held that parents abandoned any name for boys if it started to “go girl.” The picture always blurred – many names rose for both genders for a while. Other names saw some use for girls, but remained solidly masculine.

One remarkable thing about 2017 is how many names hold steady for both genders. Rowan, Rory, Sage, Charlie, Sawyer, Parker, and River are all in use for boys and girls. Others, like Peyton and Taylor remain popular for girls, but are still used for boys in healthy numbers. The opposite holds true for Jordan and Jayden.

Many parents still prefer that their child’s name clearly indicate gender. But they grew up with girl-Jodi and boy-Jody, a sense that Ryan’s middle name might be Elizabeth, and an awareness that Lindsey and Jamie belonged to the girls, but it didn’t have to be that way.

Thirty years ago, yuppie parents may have embraced surname names like Madison and Mackenzie because they believed a unisex name might help their daughters succeed in life. Or so goes the stereotype.

Today, parents from all backgrounds choose names that might be called unisex – or downright masculine – for their daughters. In some cases, parents just plain like that style of name – for boys or girls, and often both. Meet my son, Tristyn, and my daughter, Londyn.

Laura Wattenberg defined the andro-girly names in 2012. Think Addyson, Kennedi, and Rylee. Take a traditionally masculine name and respell it, but also redefine it as perfectly compatible with pink tulle and tiaras.

We are only beginning to feel the impact of Spanish language speakers.

Estimates vary, but at least 45 out of 323 million Americans speak Spanish – not counting the 6 million or so students currently studying the language. A fascinating fact: nearly 3 million non-Hispanics speak Spanish at home as of 2013.

Look at the current US Top Ten and the impact of Spanish-language speakers – or parents seeking bilingual names – becomes clear.

As Spanish and English co-exist, and more of us recognize and use Spanish words and phrases, it seems inevitable that our language will change, too – and so will the names we choose. After all, Isabella helped inspire the rise of Lucia, Ariana, and Emilia. Luna owes something to Harry Potter – but quite a bit to Spanish-English speakers, too.

Many parents develop their own personal Top Ten. Or maybe their list consists of just three or five names. But that’s not what I’m talking about.

Instead, I’m talking about The Big Sort. Americans tend to live in homogeneous neighborhoods. The people we spend time with share our religious and political beliefs, but also watch the same movies and television shows, read the same books, pay attention to the same news sources.

Assuming you have plenty in common with your friends and neighbors, odds are that you share your favorite names, too. We see this to some degree in the individual states’ Top Tens – Wyatt makes the cut in Idaho; in Kentucky, that distinction belongs toHunter and Paisley; Genesis and Henry appear at the top of the District of Columbia’s rankings.

Draw your circle any way you like, and chances are you’ll find a micro Top Ten, specific to friends and family with similar backgrounds.

Why does that matter? Your relatively unusual name might actually be much more popular in your immediate circles. The more divided and sorted our nation, the more this holds true in names.

During the early 1980s, cable television came to my street. Our family subscribed; so did the family next door. I remember watching the early years of Nickelodeon and MTV.

Even though the number of channels expanded rapidly, we still all watched the same big events. The 1993 finale of Cheers comes to mind. Even at the beginning of the twenty-first century, American Idol and a handful of other series were watched broadly.

And since Appellation Mountain launched, that splintering has accelerated. Netflix and Amazon produce original content. Internet content is vast.

Dozens and dozens of pop culture sources influence naming – think of Game of Thrones – but a smaller percentage of the population actually watches them.

Everything from broad cultural change to reality television (I’m looking at you, Duck Dynasty’s Sadie) impacts the way we name children today. But how about changes in how we think about naming?

Nine years ago, more parents hesitated to choose names that were too weird. Today, the anxiety I hear most often?

Is this name too ordinary?

I often argue that even Top Ten names are still very wearable. And parents’ preference for something slightly different started long before Appellation Mountain came to be. But the balance of parents who love Liam or Harper, but reject it because it’s too popular seem to be on the rise.

Between Pinterest and Etsy, an infinite sea of ideas exist. DIY and hand-crafted, amateur and artisanal, a vast reserve of customized possibilities exists. Our homes, vacations, wardrobes – different is normal.

So we naturally gravitate towards baby names that reflect an increased preference for individuality. Dismissive, even snarky commentary on the tendency pops up constantly. I get it – and yet, it’s not just baby names. It’s every aspect of our lives.

Ultimately, the freedom to make different choices strikes me as positive and powerful. The downside? The tremendous pressure parents might feel to be creative when they really love names like Katherine and James.

Some names – and name trends – have always been fleeting. And there hasn’t been a massive churning of the Top Ten or even Top 100 names. (The Top Ten remains surprisingly stable – look at these numbers on #1 girls’ names.)

Here what strikes me: ten years ago, I was usually the only guest at the baby shower who could rattle off the Top Ten names. Now, lots of people can name a few. We have access to data and information like never before.

I’m not sure I can prove this last one with data – yet – but I can’t shake the feeling that we’re faster to see names as “overused” and quicker to dismiss names as “too trendy” when really, it’s just dozens of media stories about Piper catching on thanks to Orange is the New Black.

Okay, that’s an awful lot of change for nine years! Here’s hoping things remain every bit as exciting for next nine.