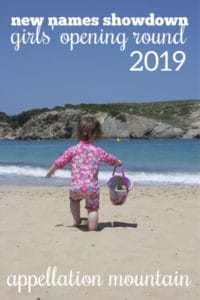 Time for the new names showdown 2019 girls opening round!

Our goal: to choose the name most likely to climb dramatically when the new numbers come out in May 2020. This is the girls’ contest; the boys’ opening round will post later today.

The competing names come from the new entries to the US Top 1000, as released in May 2019. I picked eight of the most promising entries for girls, and another eight for boys, and they’ll face off beginning today, until there’s just one left standing.

In order to compete, a name has to be either debuting on the list, or returning after an absence. I tend to overlook alternate spellings, as well as names that are just a little bit different … except for when I don’t, because two of this year’s contenders fit those categories exactly.

Now let’s put our thinking caps on, and vote for the names most likely to fare well in the immediate future.

Lovely and just the tiniest bit exotic, Anais and Zora sound like sisters. But only one can advance in our contest.

Both names connote friendship. Bellamy comes from a French phrase meaning beautiful friend; it’s said that Peter Pan author JM Barrie coined character name Wendy from a childhood nickname for a friend: fwendy. Which one do you like better?

Both of these names offer something just a little bit different. Emmarie is a twist on surname-name favorite Emery, as well as long-time #1 girl name Emma. Violeta comes from the chart-topping vintage botanical Violet, but with an extra syllable courtesy of Spanish, as well as other languages.

Two word names face off, both modern sounds with a little bit of a vintage vibe. Promise would fit right in on Plymouth Rock, and Scout brings to mind the black and white cinematic classic To Kill a Mockingbird, as well as the novel that inspired the film.

Competition tends to be fierce in the opening round, with some names knocked out quickly and without mercy. Other contests might come down to just a few votes! Voting in the new names showdown 2019 girls opening round closes on Thursday, July 11th. The next round goes live on Saturday, July 13th. Please check back to see if your favorites advance!

Image by Sally Wynn from Pixabay