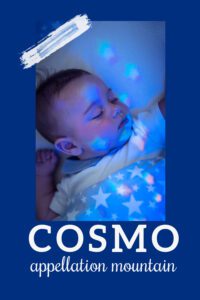 The baby name Cosmo is out of this world … and completely down to earth, too.

Sometime around the sixth century BC, ancient Greek philosopher Pythagoras used the word to refer to the universe as a whole.

Today, cosmos continues to refer to the world in the widest sense. Cosmic refers strictly to the stars and objects in the solar system and beyond.

And if you’re cosmopolitan? Then you’re someone at home anywhere. Though a closer synonym for cosmopolitan is sophisticated, not astronaut, so there’s a slightly different vibe.

You might hear the baby name Cosmo and think of two things.

The women’s magazine debuted way back in 1886.

And the cocktail? An early version was created way back in the late 1920s, but the drink made famous by Carrie Bradshaw of Sex and the City fame reached its current form in the mid-1980s.

Turns out the name is far older than any contemporary use.

The baby name Cosmo surfaces in the third century. He and brother Damian used their medical training to serve the poor. As Christians, they died as martyrs during the Diocletian persecutions.

Now considered saints, churches named in their memory appear throughout the Christian world.

Of course, that also means that the baby name Cosmo is heard across much of the world, too.

COSMAS to COSIMO to ENGLAND

The saint was probably named Cosmas – or something closer to it.

It became Cosimo in Italian, and the powerful Renaissance family, the de Medicis, embraced it.

In the 1700s, the 2nd Duke of Gordon named his son Cosmo, bringing it to broader use in the English-speaking world.

In fact, British Cosmos pop up in the history books from the eighteenth century onward.

Where did a Scottish aristocrat find an Italian name? The Duke’s dear friend was Cosimo III de’ Medici, Grand Duke of Tuscany, who reigned for a record-setting 53 years. It’s worth noting that the Tuscan ruler was something of a disaster.

But that’s so far in the distant past that it doesn’t touch the baby name Cosmo now.

While it’s been used steadily, the name appears in such small numbers that it took on a quirky, not-quite-real quality for many years.

In 1926 novel turned 1937 movie Topper, staid banker Cosmo Topper has his life transformed by a pair of fun-loving ghosts, played by Constance Bennett and Cary Grant. Sequels followed. Remakes, too, the most recent in 1979.

And if you know your Nickelodeon animated series, the long-running Fairly OddParents featured Cosmo and Wanda as Timmy Turner’s fairy godparents.

One more from the world of animation: Cosmo Spacely served as George Jetson’s demanding boss at Spacely Sprockets on long-running cartoon The Jetsons.

And, to Seinfeld fans, Cosmo is all Kramer, the resident of Apartment 5B.

None of these uses seem likely to inspire parents. But another trend might.

Boy names ending with o have gone from rising style stars to mainstream favorites. As of 2020, the US Top 100 includes Mateo, Leo and Leonardo, plus Theodore – almost always shortened to Theo.

Plenty of fast-rising choices share the o-ending, too, like Milo, Enzo, Arlo, and Nico – to name just a few.

In this light, the baby name Cosmo feels only slightly daring.

Crushed that Leo and Milo are too popular? Raise a glass to Cosmo instead.

Worldly and upbeat, the baby name Cosmo bridges the familiar and the distinctive. And now that Scarlett Johansson has named her baby boy Cosmo, a little brother for Rose Dorothy, it’s sure to attract more attention.

What do you think of the baby name Cosmo? 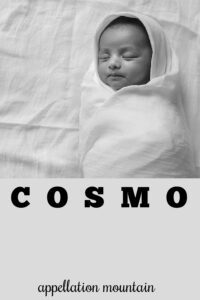