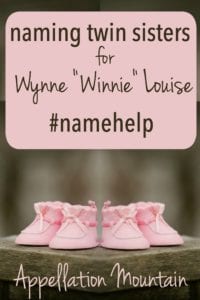 Hi! I’m wondering if your followers could recommend names for twin girls that would compliment their older sister Wynne (pronounced Winnie) Louise. Thank you so much!

Congratulations on your daughters on the way!

This is an interesting puzzle. I rhyme Wynne with kin. To me, it’s a one-syllable name. It’s also sleek and tailored, a sister for Sutton or Blair. Winnie has a very different vibe. I think of Winnie in the same category as Sadie and Charlie. The name feels spunky and retro. And while I completely see how the ‘e’ in Wynne can make it Winnie, I’m not sure it changes the contrast between trim Wynne and friendly Winnie.

In other words, you’ve managed to combine two desirable qualities in one name, a difficult feat!

It makes me think that any sister names should be simple and straightforward like Wynne, but with a healthy dose of upbeat nickname. Sutton-called-Sadie, I suppose, except I think that’s a bigger stretch than most would consider. Though it can work – I’m thinking of ESPN journalist Samantha Ponder’s daughter, Scout, short for Bowden Sainte-Claire.

Still, let’s see if we can’t generate a list of names that are sleek but still feminine, and have an obvious nickname that sounds right with Winnie.

Adair – While Adeline and friends are wildly overused, Adair makes for a rarer Addie name. Wynne and Adair sound like sisters.

Camber – I wrote about this one last year, but it has intrigued me since I first spotted it ages ago. Camber is part-Cameron and Camille, and part-Amber. The logical short form is Cammie or Cam, and I think it sounds just right with Wynne.

Cecile – Cecile leans more feminine than Wynne might – though really, in the US Wynne is rare, rare, rare for boys. But I think Wynne and Cecile pair nicely together, especially with the short form Cece.

Eden – Eden and Edie very nearly replicate that elusive Wynne/Winnie quality. Like Wynne, Eden feels brisk and modern, but far from invented. But Edie has the same retro appeal as Winnie – they sound perfectly like sisters.

Lane/Laine – Huh. Here I was, thinking another Wynne/Winnie duo would be difficult, and they just keep coming up, don’t they? Because Lane – or Laine, or maybe even Layne – sounds very much like a sister for Wynne. And Lainie – again, pick your spelling – works beautifully, too.

Tess – I love the spare simplicity of Tess as a formal name, and I think it works nicely with Wynne. Except … how do you feel about Tessie? It immediately makes me think of the Dropkick Murphys song, an informal anthem for the Boston Red Sox. (That could be a great thing, a negative thing, or completely neutral depending on your MLB allegiances.) Of course, Tessie requires no nickname, and Winnie and Tess sound exactly right together.

Vale – Vale has captivated me ever since Savannah Guthrie chose it for her firstborn. It shares the same feminine, but frills-free quality of Wynne. As with Tess, the issue is a nickname. But none is truly needed.

Okay, so the challenge is to come up with two that sound right for twins, and for Wynne’s sisters. I’m strongly drawn to Eden and Adair. I think the repeating ‘d’ sounds link the girls’ names in a way that makes them appealing to say together as a pair, while remaining distinct and different. Edie and Addie might be way too cutesy as sister names – especially twin names! – but Wynne, Eden, and Adair all work nicely together.

If not Eden and Adair, I’m most drawn to Cecile and Tess. Or maybe Tessa? I’m torn on that last one. But I think it’s another direction that works equally well.

But let’s turn it over to the readers, because I know they’ll have some fabulous suggestions!

Readers, what would you name twin sisters for Wynne Louise?