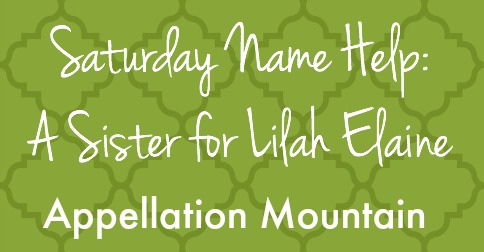 I’d love some advice on finding a name for our second daughter.

Our first daughter is Lilah Elaine. Lilah is a name my husband liked, and Elaine after a family friend who passed away right before my daughter was born.

We like names that have a vintage vibe, and that are somewhat unique, but not unheard of. We do not like strange spellings, or super trendy names. We are looking for something that would work for a child as well as an adult. (I’m thinking of what it would look like on a resume).

Names on our list so far: Faye, Margaret, Scarlett, Faith, Ivy, and Dia.

The middle name is still up in the air as well, but my husband is really pushing for Ann.

Our last name is a one-syllable color name, which makes all color names tricky.

Thank you so much for your insight!

Please read on for my comments, and leave your thoughtful suggestions in the comments! 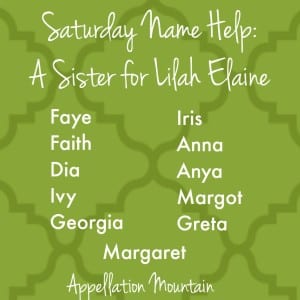 If you were naming your first child, there wouldn’t be any issue, right? You’ve got some great names on your shortlist, and while they vary in style, they’re all fantastic choices that meet your criteria.

But when we need to find a name that fits all of your criteria and sounds like a sister name for Lilah? That’s a bigger challenge!

From your list, I do think I’d drop Scarlett. Which is a shame, because it’s a great sister name for Lilah. But I can’t imagine being named Scarlett Greene or Scarlett White – it’s just too much color name, I think. But it’s very possible that I’m in the minority, and every reader is shouting, “Don’t be crazy!” So let’s have a poll:

Now, let’s look at the names on your list:

Margaret – It’s a great name, but I do think it’s different in style than Lilah. Of course, much of this depends on what you plan to call Margaret. Lilah and Maggie, Lilah and Margot, or Lilah and Greta all work beautifully, in a way that Margaret and Lilah might not.

Faye and Faith – I think both work well as a sister name to Lilah, though I wonder about such a short first name with a short last name. Faye Sutherland sounds better than Faye Smith, and Faye Ann Smith seems like not enough name.

Dia – Dia is the least familiar name on your list, though I do think it would wear beautifully.

Ivy – Again, it’s not a long name, but it’s two-syllables, and I think that’s part of why it’s my favorite from your original list!

Let’s see if we can throw a few more possibilities into the mix:

Georgia – Georgia is more popular today than in the past, but it’s still far from common. I think I’m drawn to it because it repeats ‘g’ sounds, just like Lilah repeats those ‘l’ sounds. It’s also a substantial enough name to go with Ann as a middle. Lilah Elaine and Georgia Ann.

Iris – Ivy makes me think of Iris. It’s also in the US Top 300, but never wildly popular. It feels literary and sophisticated, but not so grand that it would difficult for a child to wear. Lilah and Iris share the long ‘i’ sound, which could also help connect them.

Anna – I know you have Ann on your middle name list, but have you considered using Anna as a first name? It’s much more popular than many of your choices – the name ranked #34 in the US in 2014, and that was early days of the Frozen phenomenon. But classic names tend to feel less trendy, even when they are on the upswing. If Ann has meaning and significance, I think it’s worth considering Anna as a first name.

Anya – Along the same lines, Anya has been in the US Top 500 in recent years, but isn’t very common. It’s a Russian spin on Anna, also spelled Anja in northern European languages. Lilah and Anya are both just a little bit different without being too out there.

Greta or Margot – I think I might have suggested Greta or Margot even without Margaret on your original list! They’re both feminine names that feel vintage but not too fusty-dusty, and they’re familiar without being wildly popular.

Now, a quick word on middles. Is there a reason behind Ann? While Ann can be an elegant first name, it sometimes feels like an insubstantial middle, especially when paired with a very short first name and even more so when the last name is short, too. Dia Ann would be a mere six letters, and Faye Ann just two syllables total! It makes me wonder if a longer form of Ann – Annalise, Annabeth, the list is endless! – might be appealing?

Overall, I think Ivy is a great sister name for Lilah from your original list. And I’m very much tempted to add the two forms of Margaret, Greta and Margot, for additional consideration – either as nicknames, or as formal names.

Readers, what names would you suggest to Robin for Lilah Elaine’s sister?