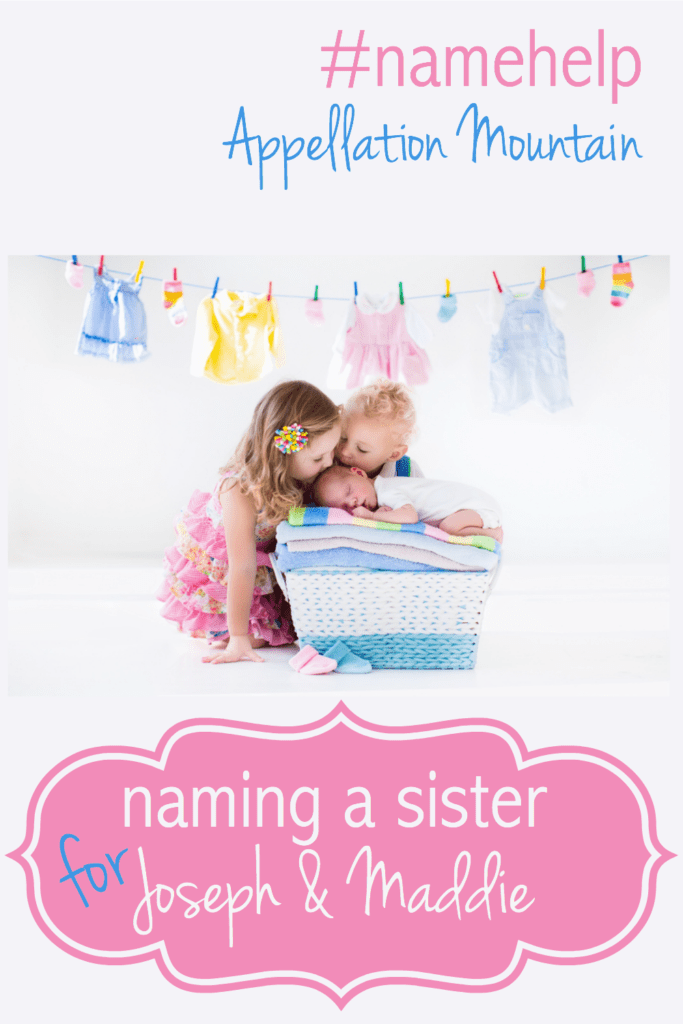 I am due soon with baby #3, a girl. We cannot come close to anything we both like. Her siblings are Joseph Alexander and Madeline Ruth. I’m Rachel and husband is Noah. We’re not religious, even given so many Biblical names going on here.

Their last names all start with Sh (mine’s different). Joseph goes by Joseph (some day I suppose that could change) but Madeline is Maddie–so I find I’ve had to rule out names with similar nicknames.

My husband would like Rose for a middle name, his grandmother, which is nice. I’d prefer Eileen, my mom’s middle. We could go either way, or neither.

Some first names we’ve tossed around:

Annika (AHN-nik-uh) – This is my top pick. My family background is heavy on the Swedish, with some Dutch, so I like it for that. And it’s Anna-like, but with a twist and has some good nickname possibilities. It’s different without being too odd, which is kind of what I’d like for this baby. I like Rose in the middle except it yields initials ARS–I’m split on if this is an issue, but there’s a Brit side to the family who will immediately see “arse” I’m afraid. Eileen in the middle, perhaps.

Emma – Husband thinks it nice enough, but too popular, not enough oomph. I’d rather not pick a Top Ten sort of name but it was my great-grandmother’s name, so that saves it slightly.

Helen, Vera, Ingrid, Eleanor – These are my husband’s top picks, in order of his preference. I can’t imagine calling out any of those. All with Rose as a middle, although IRS isn’t going to work.

He likes traditional names, “something you could call as judge or doctor,” as he always says. I could go a bit less traditional, prefer having nickname possibilities, and am aiming not to repeat an initial already in the family.

Let’s start with the easy part. If he loves Helen, Vera, Ingrid, and Eleanor, but none of them work for you, then I’d suggest you strike them all from the list.

But I think there are a few options on your list that might work, with some tweaking:

Annika Eileen or Annika Emmeline – I’m divided on whether ARS is a problem, but I’m guessing my British brother-in-law would think I’d lost my mind if we named a kiddo Annabel Rose. (Our surname starts with S, too.) That leaves Eileen, and I think Annika Eileen is just lovely. Except. I’m guessing your husband is not 100% on board, or you wouldn’t be writing. I suggest Emmeline as a spin on your family name Emma. But again, your husband isn’t getting his first or middle name preference this way, so maybe Annika is out.

Emmeline Rose – Let’s stay with the Emma idea for a minute, though. Elaborating Emma to Emmeline solves a bunch of problems. It feels like a sister name for Joseph and Madeline/Maddie, without repeating an initial. It gives you nickname options galore, from Emma and Emmy to Millie. It’s similar to his buttoned-up Eleanor, but a little less expected. Plus, it works with Rose as a middle name, which gives your husband his top choice. I think that makes it a great choice!

Helena – It seems like your husband favors names that more tailored, while you’d prefer something with a little more romance. Add an ‘a’ to Helen, and you have Helena. The downside? There are at least three distinct pronunciations, depending on your preference. And those pronunciations can impact the nickname possibilities. Say it heh LAY nuh, and she’s Laney. Opt for the British hel en uh, and she’s Nell. Still, it feels like middle ground between Annika and Helen, so I think it’s worth a look.

But let’s namestorm some more possibilities:

Margaret – Ingrid always makes me think of Greta, a common short form of Margaret that shares the ‘gr’ sound. And Greta Garbo is undeniably Swedish. So if Annika is a non-starter for your husband, would he consider Margaret, called Greta? Margaret can be a judge, a doctor, or a prime minister. And if Greta isn’t quite right, Margaret is nickname-rich. The downside? Margaret and Madeline would share an initial, and Maddie and Maggie are probably too close.

Caroline – Charlotte and Caroline are both feminine forms of Charles, but while Charlotte is a darling of our moment, Caroline remains relatively underused. Okay, it ranks right around #50 in the US, so that’s not exactly obscure. But it’s not Emma.

Genevieve – I noticed your husband loves Vera. I wonder if another name with a strong V sound and possible nicknames might make for a great compromise? There’s something slightly French about Madeline, so how about Genevieve? They make great sister names, without being too Eiffel-Tower-poodle-baguette together. And nicknames? Oh boy golly, does Genevieve have nicknames! I think Vivi is especially sweet, which brings me to …

Vivian, Vivienne, or Viviana – Or maybe another Vivi name would please? Vivienne is the most French, Vivian the most tailored, Viviana the most romantic. I think someone who loves Helen and Vera is likely to respond to Vivian, but perhaps Viviana or Vivienne would be more in line with Annika.

Susannah – Susannah feels like a name that would be common, but it isn’t. Not even a little bit! Of all of the possible Sue- names out there, only Susan ranks in the current US Top 1000 – and that name ranked around #850 in 2014!

Louisa – Yet another traditional name that’s fit for a woman of serious pursuits, but still has plenty of cutesy nicknames, like Lulu and Lou. Louisa isn’t very common, but no one would be confused about how to say or spell it, and I think it pairs well with Joseph and Madeline. Joseph, Maddie, and Lulu.

Juliet – I initially thought about Julia, a traditional and storied name that feels serious, but has a certain romantic appeal, too. And then it hit me – romantic. Why not Juliet? It’s slightly unexpected, very current, and has nicknames galore. (My favorite of the moment is Jet, a contracted form of the name.)

Annarose – You mentioned appreciating Annika’s Anna roots. Good news! There are plenty of Anna names, including Annabeth, Annalise, and Annabelle. If none of those appeal to you, would you consider Marianna, Eliana, or Juliana – all names that put the anna at the end?

Okay readers, it’s your turn. What would you suggest to Rachel and Noah for their daughter on the way?

This post was originally published on December 8, 2008. It was substantially revised and re-posted on April 30, 2016.