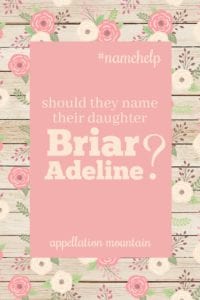 Update: She’s here! Krista writes, “Thanks for all the encouragement. We stuck with our favorite name, Briar Adeline. Despite all of the criticism before she was born, no one has said a word since she was born, and I love how it reminds me of my grandmother. We’re so glad we didn’t get talked out it!”

We’re expecting our daughter in a few weeks, and we think we’ve chosen a name. But when we started telling other people, we got some negative reactions. Should we go back to our list, or just go with the name we like?

I’ve been saying that we wanted to name a daughter after my grandmother since we first got married. My gran passed away unexpectedly while we were engaged. We were very close, and I still miss her all the time.

Her name was Rose, and her married last name was Bryer. I always liked the fairy-tale sound of Rose Bryer, like Briar Rose in Sleeping Beauty. She didn’t have a middle name at birth, but she used Adelaide, her confirmation name, and I know she really liked it.

The name we’ve chosen is Briar Adeline, a different spelling of her last name and a form of the middle name she chose for herself. We don’t want to use Adelaide, because our last name sounds like Hailey-with-a-P, and so the D/P sounds run together too much.

We think it’s perfect, but maybe I was a little worried my husband’s family would feel slighted. (We do plan to name a future son after his dad, so it’s not like it’s all about me.)

Instead, they both hate it.

His family’s objections: Briar is a boy’s name/Briar isn’t pretty. My family: if you’re naming her after Gran, you have to name her Rose.

Seriously? I know maybe we should just shrug it off, but it’s bothering me. And now I’m second-guessing our choice. What do we do?

Families are so very wonderful, and we need them more than ever once we welcome children of our own. And yet, often they seem determined to derail our naming decisions, don’t they?

Your grandmother’s name – as she used it – was Rose Adelaide Bryer. I’d agree that Briar Adeline Hailey-with-a-P isn’t an exact honor name. But I’d also argue that a little bit of healthy reinvention is smart. It honors your grandmother’s memory while also giving your daughter an identity of her own.

There’s also a style gap between Briar and Rose. Briar is modern, new to the US Top 1000, and still relatively unexpected. Rose is timeless, and also familiar. I’m guessing you might like names like Haven, instead of something more like Eleanor? So if Briar honors your grandmother and is true to your style, then that’s a win.

It’s easy to argue that Briar feels masculine, especially since it comes from surname Bryer. (Though, for what it’s worth, it typically comes from the nature name.) We tend to sometimes reserve those family surnames for a son. And names like Brian and Bryce are solidly masculine.

And so it’s not surprising that Briar ranks in the US Top 1000 for boys and girls. In fact, 243 boys were named Briar in 2017 … and 397 girls. It’s a little bit unisex. And with names like Rowan and River rising for girls and boys alike, I can imagine that you may very well meet boys named Briar, too.

But is Briar a boys’ name? Not by any stretch. It trends unisex.

My sense is that you’ve found your daughter’s name, and it’s just a matter of smiling and singing la-la-la should your loved ones object.

But let’s have a poll because maybe I’m missing something.

What advice would you give Krista and her husband about their daughter’s name?