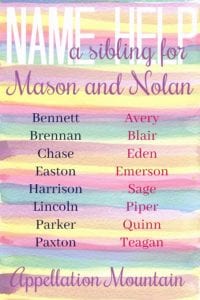 I have twin boys Nolan and Mason and we are now expecting our third!

I love that Nolan and Mason seem very balanced, modern and yet still relatively unique. I often get compliments how well they go together and how strong they sound.

But now what do I do for baby three? Do we choose a name that balances with them? Or go a whole new route?

Nolan and Mason are very balanced. They make good twin names because, as you say, they feel similar in many ways, but still sound like two distinct, different choices.

Finding a third boy name that fits this pattern is certainly possible. You’re looking for a two-syllable, ends-with-n name, probably with a bright vowel sound and most likely originally a surname. Names like Easton and Tyson come to mind, or maybe Hudson or Landon, Ethan or Nathan.

But that seems like a very limiting set of criteria. Unless something jumps out at you as The Name immediately, I’d suggest you look for something that only matches two or three of your twins’ name characteristics. Why? First, should you ever add a fourth child to your family, a less rigid pattern is helpful for choosing yet another name. Second, you’d have very few names to choose from if you went this route – and few would be as nicely balanced as Mason and Nolan.

For a girl, the question is even trickier. And you drawn to tailored names like Harper and Maren? Or do you prefer names that feel a little more conventionally feminine? There’s no wrong answer, but that can make drafting a list feel truly challenging.

So let’s dive in!

A Brother for Mason and Nolan

Half of these are two-syllable names ending with ‘n’, but the other half have slightly different sounds. They’re all surname in origin, though many of them feel very familiar as given names in 2018, just like Nolan and Mason.

Bennett – Along with Emmett, Everett, Beckett, and Elliott, Bennett is one of those fast-rising surname names for boys that’s just slightly different, thanks to the -t ending. It could shorten to Ben, but I’ve yet to meet a boy with an -et ending name that didn’t use it in full.

Brennan – The downside: Brennan sounds an awful lot like Brendan and Brandon, so some confusion is inevitable. But it’s upbeat, Irish, and relatively uncommon. I like it especially as a brother for the equally Irish Nolan, but I think it works well with Mason, too.

Chase – Or maybe you’d prefer something shorter? Chase has the same polished, modern feel as Nolan and Mason, but the single syllable makes it stand out from your twins’ names.

Easton – Easton fits your established pattern perfectly, with a long E sound instead of Nolan’s O or Mason’s A. I’ll admit I like it quite a bit as a brother for Mason and Nolan, but my cautions apply. If you imagine you’ll be naming more children in the future, this could feel limiting.

Lincoln – Lincoln makes for an Americana choice, one that feels rich with history. And yet, it’s got a cool sound that fits well with Mason and Nolan, too.

Parker – Just like -t ending names are slightly different, -r enders might be another good choice. Parker sprang to mind immediately, but I have lists of options.

Paxton – One more in the two-syllable/ends-with-n camp: Paxton. I think the ‘x’ makes it such an interesting choice. While it comes from an Old English surname related to an all-but-lost given name, for me it brings to mind the Latin word pax – peace.

A Sister for Nolan and Mason

When it comes to naming a girl, the choices are even greater! I’m sticking to surname-style names, but mostly with a non-n ending. The question for you is this: do you want it to be obvious that your three children are two sons and a daughter? Or would you consider naming your kids, say, Nolan, Mason, and Parker, knowing that no one could guess which was a girl? It comes down to personal preference, though I tend to err on the side of guessable.

Avery – A three-syllable surname-style name ending with y or ie might be a great sound with Mason and Nolan. Plenty of the choices lean feminine in use. Avery is one stylish option, and Everly is another. But rarities like Bellamy and Romilly could work, too.

Blair – Blair means field, and it was used in small numbers for boys over the years. But lately, it’s switched to the girls. Why? Television characters like Blair Warner from The Facts of Life in the 1980s and the more recent Blair Waldorf of Gossip Girl helped. But it also sounds just like the classic Claire. Spelling Blaire also appears in the current US Top 1000 for girls.

Eden – Not quite a surname name, Eden still shares that style and rhythm. The long E sound works well with Nolan and Mason, but still leans feminine.

Emerson – Emerson is used for boys and girls, so I’m not certain that it exactly fits my criteria. But I still it would be a great addition to your family!

Sage/Saige – Like Eden, Sage is more nature name than surname. But it’s not so dramatically different in style that Sage wouldn’t sound like a sister for Nolan and Mason. In fact, I think it’s just different enough.

Piper – Top Ten favorite Harper is an r-ending option for a daughter, but I like Piper best with Mason and Nolan.

Quinn – Maybe a single-syllable name would appeal? I love Quinn, with all its lively Irish style. There’s also Sloane, Lane/Laine, and lots of other possibilities.

Teagan – Just as Easton matches perfectly on the boys’ side, I think Teagan is a logical choice for a daughter. It comes from an Irish name meaning poet, which seems like quite the appealing association.

Overall, I really like Easton and Teagan if you want to stick to your established pattern. But if you’re inclined to branch out – and that’s almost certainly what I would do – then Parker and Piper get my vote. They share the same style, but with a sound that’s just slightly different.

But let’s open it up to the readers, because I know they’ll have some great suggestions. And I’d especially love to hear from parents of twins who welcomed another child later. What was it like naming your younger children?

So, let’s hear it: what would you name a brother or sister for Nolan and Mason?