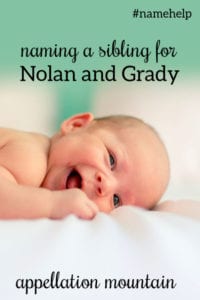 We are expecting our third and final baby at the end of January. This time I don’t want to know gender ahead of time and am at a complete loss for names (especially boy names).

Our sons are Nolan John and Grady Allen. Both names were from my husband’s list as I tend to prefer more obscure names. Still would prefer a name not in the top 100!

I love looking at name meanings (for those reasons I am drawn to Moira, Sedna, Sylvia, and my guilty pleasure name Morrigan).

Our family is into nature and the outdoors; both my husband and I are high level martial artists.

He prefers names that aren’t too “out there” while I would readily name a child Scout, Cove, Ridge, etc. I would welcome any suggestions for boys or girls! Thank you so much!

It’s tough to find a compromise when one partner gets nervous much outside of the Top 100 … and the other is thinking anything in the most popular 999 names is too common! But you’ve found two handsome names for your boys, so I’m sure we can help you find a third.

I wonder if your husband is more flexible on names for girls? Because a greater varieties of sounds and styles have been used for girls across the generations, parents often feel like they can be more daring when naming daughters. I’m going to assume he’s not keen on Moira, Sylvia, Sedna, or Morrigan – even though Moira and Sylvia seem like reasonably familiar choices.

As for boys, a name like Ridge seems obvious for an outdoorsy family! But let’s see if we can find names with a similar style that fit with Nolan and Grady, while splitting the difference between fits-in and stands-out names.

A SISTER FOR NOLAN AND GRADY

Adara, Adela, Adele, Adelaide – You mentioned meanings; because Nolan and Grady can both mean noble, I wonder if you’d like one of these? Adara means noble in Hebrew; the other three, in Germanic.

Carina – Carina could come from the Latin cara – dear. Or it might refer to the keel of a ship, or the constellation in the night sky that looks like the keel of Jason’s ship, the Argo, from Greek myth.

Ivy – Sylvia makes me think of Sylvie, which brings to mind Ivy. Ivy is wintry and maybe a little bit on the different side. (Though it’s just inside the current Top 100 now.) It’s definitely a nature name, with a little bit of an edge.

Juniper – Speaking of nature names, I love the idea of Juniper with Nolan and Grady. It feels similar in style, but distinct in sound.

Maeve – This name is Irish like Nolan and Grady, shares the ‘v’ of Sylvia, and comes from a legendary warrior queen.

Maura – Would changing the spelling from Moira to Maura sway your husband? Maura looks like Laura, which might make it slightly more familiar. And while the two spellings suggest different origins, and perhaps meanings, too, in practice, they’re often used interchangeably.

Olive – I’m guessing Olivia is much too popular for your tastes, but how about Olive? It has that sharp v sound, and an undeniable tie to the natural world. Plus, because olive branches are associated with peace, there’s another layer of meaning beyond the botanical one.

Piper – Yes, it’s Top 100. But it’s kind of perfect with Nolan and Grady, isn’t it? High-spirited and modern, but a name with roots, too.

A BROTHER FOR NOLAN AND GRADY

Declan – Again, Declan feels more mainstream than you’d like. But there’s something about the strong sound of Declan that makes it feel distinctive.

Flynn – Errol Flynn, Flynn Ryder … we’ve associated this name with dashing, daring men from the era of silent film to Disney blockbusters. And it splits the difference between chart-topping favorites and more obscure choices.

Kieran – I feel like I’m big on Kieran lately, but here’s the thing: it’s kind of perfect. It’s slowly gained in use since the 1990s, making it generally more familiar. I think that might appeal to your husband. But it’s barely crossed into the Top 500, so maybe that will make it just different enough for you?

Knox – At first glance, Knox is different from Nolan and Grady. And yet, I think it works every bit as well. On the outdoorsy scale, it means hill – so while it’s subtle, the connection is there. The ‘x’ makes it a little bit edgy and cool, putting it in the same general category as Cove. But it’s much more common than you might guess, currently in the US Top 250, so perhaps your husband can be persuaded?

Wilder – Wilder succeeds because it’s both bold and outdoorsy, but still a little bit buttoned-up. It’s midway between William and Stryker. It shares the vibe of Scout and Cove and Ridge, but it’s far more familiar. Plus, because it has literary (Thornton) and Hollywood (Billy) associations, Wilder is rugged, but also versatile.

My favorites are probably Wilder for a boy and Maeve for a girl – they just seem to hit the middle ground between something a little bit fresh and new and something familiar enough that it feels accessible.

But I know our readers will have lots of great suggestions, so let’s open it up for comments: What would you name a brother or sister for Nolan and Grady?