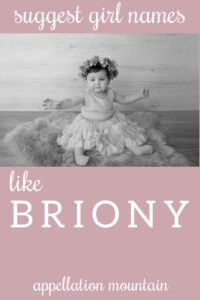 My partner and I are expecting our first child together in September. He has two children from his first marriage. Their names are common, Top Ten choices with traditional middle names. (Changed for privacy, but similar to Mia Katherine and Liam Joseph.)

They’re nice names, but that’s not my taste at all. I always thought I’d name my child something different, partly because I’m a teacher and I’ve heard every name. Briony had been my favorite since Atonement, but I’ve taught a lot of Briannas, so now I’m less sure about that.

Haven was on my list, too, but now there’s one at my school. (Though I haven’t had her in class.)

While he had some ideas for boys, my partner is open to pretty much every name I suggest for our daughter.

I don’t want to be insensitive in any way, but I don’t feel like matching the older kids’ names is necessary. Right?

We are not interested in using honor names/family names, etc.

Her last name will be Edward-with-an-s.

I think it’s smart and caring to consider your stepchildren’s names. After all, they’ll be a part of this child’s life forever, and it’s good to practice saying the names ensemble.

When it comes to half-siblings, though, I think there’s far less pressure to match. Instead, the focus should be on avoiding awkward repetition. Mia’s half-sister shouldn’t be Leah or Mila. Could Liam have a half-brother named William and called Will? Sure. But it seems WAY too close.

That’s the test, then. Not “does Briony/Haven sound like Mia and Liam’s sister” but “does this name sound awkward/problematic with Mia and Liam?”

It’s a much lower bar – and that’s freeing!

So let’s focus on finding some great, underused names like Briony for your daughter … and you can evaluate them for potential clashes with your stepkids’ names.

While it’s the name of a green gemstone, Beryl isn’t nearly as obvious – or as popular – as Ruby, or even Pearl. Early aviator and adventurer Beryl Markham lends some vintage appeal and a certain boldness to the name.

Ties to both dolphins and the delphinium flower make this a nature adjacent name. It’s also tailored and French, just like current favorite Josephine.

Sparky, high-energy Dinah is the kind of name we’ve overlooked for ages, but would be amazing on a child today.

The medieval English equivalent of Jasmine, just a little more lush and unexpected. Jessamy is a related choice.

A surname name with a distinctive sound.

Like Langley, Romilly is probably best thought of as a surname. But it also reads a little like a Rose-Milly mash-up.

A poetic word for valley, brief and complete Vale fits right in with Sloane and Wren, but is rarer than either.

I keep coming back to Romilly. It shares the same rhythm as Briony, and has history, too. But there’s something a little bit modern and cool about the name, too, which reminds me of Haven. And while I imagine you’ll eventually teach a kid named Rose, Rowan, or Millie, Romilly still seems distinctive and fresh.

Readers, over to you! Any advice on handling half-sibling names? And what unusual names for a daughter can you suggest to Karla?