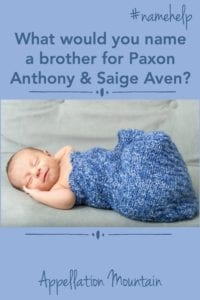 So I’ve been following your website for literally 8 years. To me your lists are unique but not ridiculous. Both my children were inspired by your website. I have an 8 year old boy named Paxon Anthony and a 5 year old girl named Saige Aven. Well I’ve recently found out I will be having a baby and it is confirmed to be a boy. I could pick girl names all day long, but boys are so tough for me. I need something unique but not bizarre.

Some of the names we are considering are Beckett, Zane, Roan, Jasper. The middle name will be Phillip. I appreciate any advice!

I think you know your style well. Paxon and Saige are stand out names that still fit in, choices that feel just a little bit different.

One challenge: the world has caught up to you! Beckett ranks #213, and Jasper comes in at #209. Zane falls at #211. And while Roan fails to crack the current US Top 1000, Rowan – and Ronan – are very popular today, making the sound feel more familiar than you might like.

There’s absolutely nothing wrong with a little extra popularity. But my guess is that your ideal name sits on the opposite side of the current US Top 500. And while the name should sound modern, it also has to feel like it has roots, right? I think that’s part of the unique, not bizarre profile.

Briggs – Both of your older children’s names have an ‘s’ sound, so I wonder if you’d like an -s ender? Some, like Brooks, rank in the US Top 250. And Miles has really paved the way for these later picks. But many of them remain under-the-radar. Briggs is just inside the current US Top 700, which makes it familiar, but still quite rare.

Camber – Some give Camber to the girls, thanks to the Amber-with-a-C sound. But Geoffrey of Monmouth wrote that Camber was the first King of Wales. Like many of the author’s characters, Camber was the stuff of legend. And yet, names from folklore have plenty of history. Paxon, Saige, and Camber.

Darrow – Scottish surname Darrow isn’t often heard as a given name, but it has plenty of history. It means “oak tree.” Attorney Clarence Darrow famously argued the Scopes monkey trial, along with many other notable cases in the early twentieth century. With names like Leo, Milo, and Arlo in favor, an -o ending name fits right in, while still standing out.

Keane – Keane sounds like keen, as in clever. But it’s an Irish surname originally, likely related to Cian, a name from Irish legend. (There are other possible origins, too.) It’s short, like Saige, but has strong and distinctive sounds. It’s never charted in the US Top 1000, so while it feels familiar, odds are against meeting other kids called Keane.

Kieran – I quite like Kieran because it crosses cultural boundaries so effortlessly. It can be an Irish name, worn by saints and meaning dark. Spelled Kiran, it comes from Sanskrit, and means sunbeam. I think Kieran clarifies the pronunciation better – the first syllable rhymes with deer – but both are options, along with the more traditionally Irish Ciaran.

Soren – Soren sounds like soaring, minus the ‘g’, which always strikes me as a pleasing image. But it’s a Scandinavian name – think of philosopher Soren Kierkegaard – ultimately from the Roman family name Severus – serious or stern. (Though perhaps an older meaning is closer to steadfast.) Again, there’s that repeating ‘s’ sound. Soren appears in the US Top 1000, currently ranked #568.

Quinlan – Yet another surname with Irish roots, Quinlan doesn’t make the current US Top 1000. Quinn, of course, ranks for boys and girls. (In fact, it stands at #79 for girls.) Q names are always, almost automatically, distinctive and cool. But Quinlan is even rarer than picks like Quincy and Quinten.

Vaughn – Vaughn combines a simple sound with a complex spelling. That’s often a downside, but names like Claire, Beau, and Isla prove that a great name can flourish despite needing to spell it often. Vaughn ranks in the current US Top 1000 at #864, but it has bounced around the Top 750 to 1000 names since the 1990s without ever really catching on. It’s short, but with a distinctive sound. Paxon, Saige, and Vaughn.

I feel like I could go on – and on! – with distinctive names that feel modern, but not too out there. Because your older kids’ names feel more like surnames than traditional given names, I’ve tried to hit that note, too. At the moment, I’m most drawn to Vaughn. But I’ve changed my mind at least a half dozen times – Soren was my original favorite. I think Phillip works well with any of these names, so I’m not sure that narrows it down, either!

Also, while Zane might seem a little more popular than ideal, if you love the name, I do think it works beautifully with Paxon and Saige.

Let’s turn this over to the community. Readers, what would you suggest as a name for Paxon and Saige’s little brother?