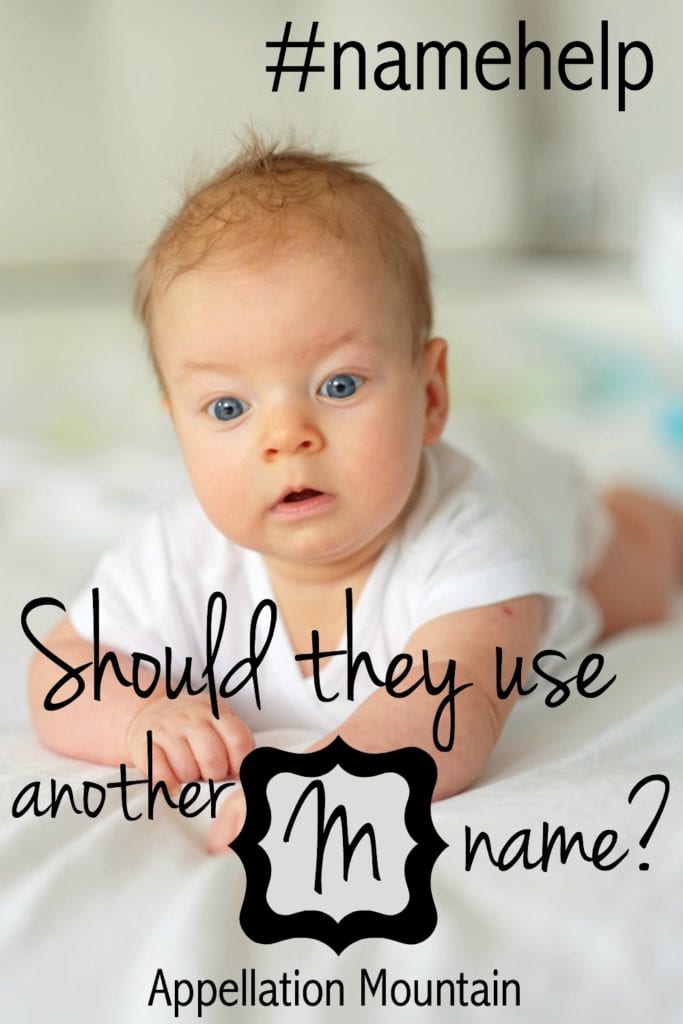 My husband is the youngest of five kids, all with M names. My in-laws are Mary and Mitch, and they thought it would be fun (!) if they started a family tradition.

And, oh what a tradition it has become!

All four of my husband’s siblings have kids, each and every one with an M name. And I have an M name, too. Seriously! I didn’t think anything of our shared initial, until I met his family. And then it was too late!

Now we’re expecting our first, due on Thanksgiving, a delivery surprise. This will probably be our only child. I don’t hate the idea of another M name. I don’t love the idea, either.

There aren’t THAT many M names! We have nine nieces and nephews on my husband’s side, and we see each other pretty often, so repeating a name isn’t an option. The names that are taken are: Mason, Maya, Maggie, Madelyn, Maddox, Miles, Micah, Mia, and Maxwell. Plus, my sister-in-law is also expecting, due after me, and has announced that they’ll use Marley for a girl and Marcus for a boy.

So. Are we the ones to choose a random name from one of the other 25 letters of the alphabet? My husband would rather we stick with the M names, but doesn’t have any ideas. His only suggestion so far is Matthew Junior – but I’m not on board, and I don’t think he really means it, either.

Are there some great M names that we’ve overlooked? If we could find the perfect M name, I think that would be the end of the discussion. There aren’t any names I especially want to use, M or otherwise. Maybe I’m just stuck on the whole question of M names in the first place.

Our last name is two-syllables, sounds like Freeman, but with a B instead. Middle name will probably be my last name, Hunt.

Read on for my reply, and please leave your thoughtful suggestions in the comments.

Second, wow! I’ve heard about families with shared initials. But yours is the first example I’ve found where the pattern actually continued into the next generation without exception.

I do think there are still plenty of great M names to consider. But before we get into the names, let’s talk about family traditions in general, and how to decide if you should continue an existing pattern, or go your own way.

In this case, I think an M name might work nicely, and here’s why:

That said, I don’t think you should feel like you must use an M name. But it feels like you’re stuck on should-you-or-shouldn’t-you? Beginning your search with M names at least gets you to a shortlist. The caveat: if you discover a name you love along the way, you’re completely free to use it instead.

Malcolm – Malcolm is one of those under-the-radar names. It’s familiar but regal. Literary and accessible. Tied to history and pop culture, too.

Macon – Mason is a chart-topper, and we’re all about place names. But somehow Macon is seldom heard.

Macallister/Mcallister – Yahoo!’s Marissa Mayer stuck with M names for her firstborn, son Macallister. It’s a long name, but it’s very friendly and upbeat. With babies named Sullivan and Elliot, why not Macallister?

Mathis/Matheson – Your husband’s name is Matthew, and you’re not keen on juniors – but maybe a name inspired by Matthew? Mathis and Matheson are surname options that might appeal.

Mateo/Matteo – Along the same lines, Mateo and Matteo are possibilities that put a romance language spin on the traditional name.

Miller – Yes, there’s the beer. But in an age of boys named Hunter and Carter and Parker, Miller fits right in.

Maisie – Maisie is a short, retro name in the key of Sadie.

Mae/May – Mae is, by far, the more popular spelling, but both are valid options. It’s a mini-name, short on sound, but without sacrificing style.

Magnolia – The opposite of Mae is the flowery Magnolia.

Margot – Normally I might rule out Margot, since Maggie is also a form of Margaret, and you’re trying to avoid duplicates. But when you’re working with one letter, I think that rule has to go.

Molly – There’s no Molly in your family! There might be a Marley. But see my comment above – just as you have to overlook connections like the Maggie/Margot/Margaret link, you’ll have to accept some duplication in sound.

Millie – Miller made the boys’ list, and there are a bunch of Mil- names for girls: Mila, Milla, Millicent, Mileva … or maybe just Millie.

If none of these feel quite right, may I offer another suggestion? If forgetting M names entirely feels like too much of a break, you might choose an M name for the middle. In particular, Mary and Mitchell might make great middle names – either in lieu of your surname or in addition to it.

Readers, let’s start with a poll, and then I’d love to hear your thoughts in the comments.