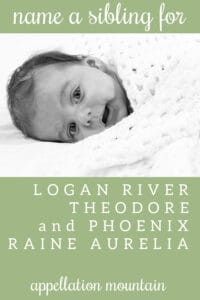 We are expecting a third child and cannot find a name me and my husband agree on!

We have a son named Logan River Theodore and a daughter named Phoenix Raine Aurelia.

I like Ophelia, Nova, Clementine for girls; and Onyx, Lincoln, Ezra, Buzz for boys. My husband isn’t sold.

We do prefer names that won’t be shortened typically.

Wondering if you or your followers can help us?

I hear a few things in your older kids’ names: they’re familiar, but not necessarily traditional.

And looking at your full list, it sounds like you’re open to lots of different kinds of names. Romantic Ophelia, casual Buzz, popular Ezra.

When it comes to avoiding nicknames, I do think it’s often best to stick with two-syllables or less. I’m not inclined to call Logan “Lo” or Lincoln “Link” necessarily. But Clementine, somehow, becomes Clem. Or Cleo … or … you get the idea.

To be clear:  mismatches are fine. Children are individual human beings, and the circumstances of every pregnancy are different. So maybe a more feminine name makes sense for this daughter. But thinking about this from the sisters’ point-of-view, it does feel a little unbalanced.

So while I don’t think you need to choose another unisex name, I do wonder if something less frilly would be a better fit for a second daughter?

Let’s jump into the names.

A BROTHER for LOGAN and PHOENIX

Something that seems potential appealing: not only does every kid had a separate first initial, each of these names has a different ending sound. If Brooks is close, but not quite, there’s Wells, Hayes, Miles, or so many other names in this category.

Strictly speaking, this is a traditional Irish name. But it sounds much more like a modern English one, cool and just a little bit different.

Because that X sound is so strong in some of your favorite names, like Onyx.

Is Lennox too close to Logan, or do they sound just like brothers? Since Lincoln was on the maybe list, I figured Lennox might offer the best of Onyx and Lincoln.

A fun, interesting surname name that feels wearable and distinct.

How do you feel about names ending with R? There are some great choices in this category. Wilder is my favorite with Logan and Phoenix, but there’s Miller, Thatcher, and dozens more.

A SISTER for LOGAN and PHOENIX

Tailored and just on the right side of feminine, Blair balances out Logan and Phoenix nicely.

A tree name with a bouncing, upbeat vibe.

Noah is a Top Ten favorite for boys. Noa is a completely separate name, with a different origin – but plenty of appeal for a daughter.

Depending on your perspective, sage is a color, an herb, or a wise person. The spelling Saige is reminiscent of former favorite Paige.

A surname name originally made famous by celebrity baby and child star Tatum O’Neal, this surname name only caught on in recent years. It sounds very much like a sister for Phoenix and Logan.

My favorites are Lennox and Saige, because they’re current, nickname-proof, and match the same vibe as Phoenix and Logan.

It’s tempting to come up with combinations – Saige Onyx Ophelia? Saige Clementine Nova? Oh, maybe Lennox Ezra Buzz … or is that too much Z?

Readers, over to you! What would you name a sibling for Logan River Theodore and a daughter named Phoenix Raine Aurelia?