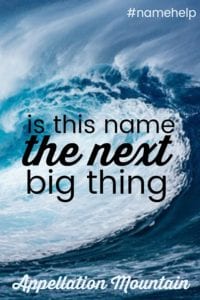 I really like the name Maren for my daughter (due at the end of March 2018). It has been on our short list of about 5 names for quite a while. The other 4 choices are more traditional … Anna, Lillian, Maggie, Fiona.

I like Maren because it is somewhat unique. But how can I predict whether or not it will become trendy in the next couple of years? If Maren became the new Ava or Ella and there were 5 of them in my child’s class, I would be heartbroken! Should my fear of future trendiness lead me to go with one of my more traditional choices?

Perhaps there is no way to predict if a name will trend, but if there is some magic to it, please share!

First, congratulations on your daughter!

The question you’ve raised comes up All. The. Time. There’s a constant search for sweet spot names. They stand out and fit in. They don’t feel invented, but they’re not traditional go-to choices, either.

And yet there’s an equal concern. When you do find something that feels fresh and novel, but not too out-there, will it be the next chart topper?

When I last wrote about Maren, I called it “fresher than Karen, less expected than Madison.” There are so many reasons to love this tailored name with ties to the sea. I do think it will continue to gain in popularity. But is it too popular for you too use?

First, let’s take a step back and look at the big picture, before we focus on Maren specifically.

Is this Baby Name the Next Big Thing: Data First

We’re lucky to have mountains of data at our fingertips. And yet, it can be tough to understand what the numbers tell us. It’s even harder to square the numbers with our personal experience.

Most names outside of the US Top 1000 slowly grow in use over many years. Let’s look at the names that most recently debuted in – or returned to – the US rankings.

They fall into a few general categories:

Why? Well, once a name debuts in the US Top 1000, it’s likely to get more attention. From people like me, who write about names, of course. But countless parents turn to the Top 1000 for inspiration, too – after all, the list is widely available, from the US Social Security site and dozens of others. This applies to all of the Top 1000 names, of course, but the new debuts often seem most likely to attract attention. Maybe that’s because parents gravitate towards the top half of the list, looking for that elusive name no one’s ever heard, but everyone is sure to love.

Is this Baby Name the Next Big Thing: How Many Ellas?

While we’re looking at data, let’s talk about precisely how often a Top Ten name repeats.

In 1948, nearly 33% of all boys received a Top Ten name. For girls, it was lower – but still around 25%. Today, those numbers have plummeted. Around 7.5% of boys receive a Top Ten name, and the same percentage is true for girls.

In other words, it’s possible that a girl born in 2018 will share the name Ella or Ava with other girls in her class. But it’s statistically unlikely. And five? That would be an anomaly. Names just don’t repeat often enough for that to happen anymore.

Now, what does happen is that children have very similar names. My daughter’s class includes girls named Layla, Lila, and Lorelei. That’s a lot of -la sound. But none of those names repeats. A better question might be: will my child’s name share sounds with lots of other names?

Is this Baby Name the Next Big Thing: Meteoric Rise 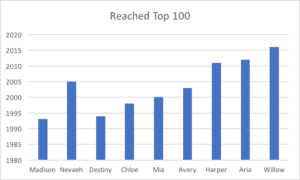 Even the fastest rising names take years to catch on.

These are the white-hottest of the names, propelled by a mix of on-trend sound and popular culture.

Most names take far longer to arrive. A few other examples:

In other words, it’s likely that it will take any name that just entered the US Top 1000 around a dozen years to reach the Top 100.

Is this Baby Name the Next Big Thing: 8.11 Years

So let’s say a name is destined for the Top Ten. While I haven’t looked at this question specifically, it’s worth noting that it takes an average of 8.11 years from the time a name enters the US Top 100 until the time it peaks at #1.

While a very small number of names climb faster, the norm is somewhere around a dozen years from rediscovery to widespread popularity.

Is this Baby Name the Next Big Thing: Patterns

Fresh and novel names do seem to be most subject to quick rises.

The highest debuts and fastest rises are fueled by pop culture. Without a celebrity – or celebrity baby, fictional character, or other attention-grabbing event, few names rise as quickly as Willow (Smith), Harper (Lee), or Mia (Farrow). And, even then, it typically takes time – those dozen or more years – for a name to graduate from ripped-from-the-headlines to mainstream-favorite status.

Is this Baby Name the Next Big Thing: Back to Maren

So … let’s take this back to Maren.

I don’t have a crystal ball, but I do have all of this information on data and patterns.

Interestingly, Maren feels like a fresh, novel name – but it’s actually teetered on the edge of the Top 1000 for a while now.

Not a lot of other names sound like Maren. Other spellings are possible, but unlike the eight spellings of Madelyn in the current Top 1000, there’s really one Maren right now.

If it follows the fast-rising pattern of a name like, say, Harper, that means it will be around 2022 before it’s really, wildly common.

And even then, really, wildly common doesn’t mean that there will be five in her class.

Do I think Maren will continue to grow in popularity? Yes. It’s a great name! But do I think it will ever be so common that you’ll regret it? No. I think the worst case scenario is that your Maren will someday babysit a little Maren. Or she’ll become a pediatrician or a soccer coach or a photographer, and lots of her little patients/athletes/subjects will share her name.

But for now? Odds are that you are safely ahead of the curve. If Maren is your favorite name, then by all means, use it!

Readers, what do you think about Maren’s future popularity? And how far would you go to avoid the Next Big Thing?