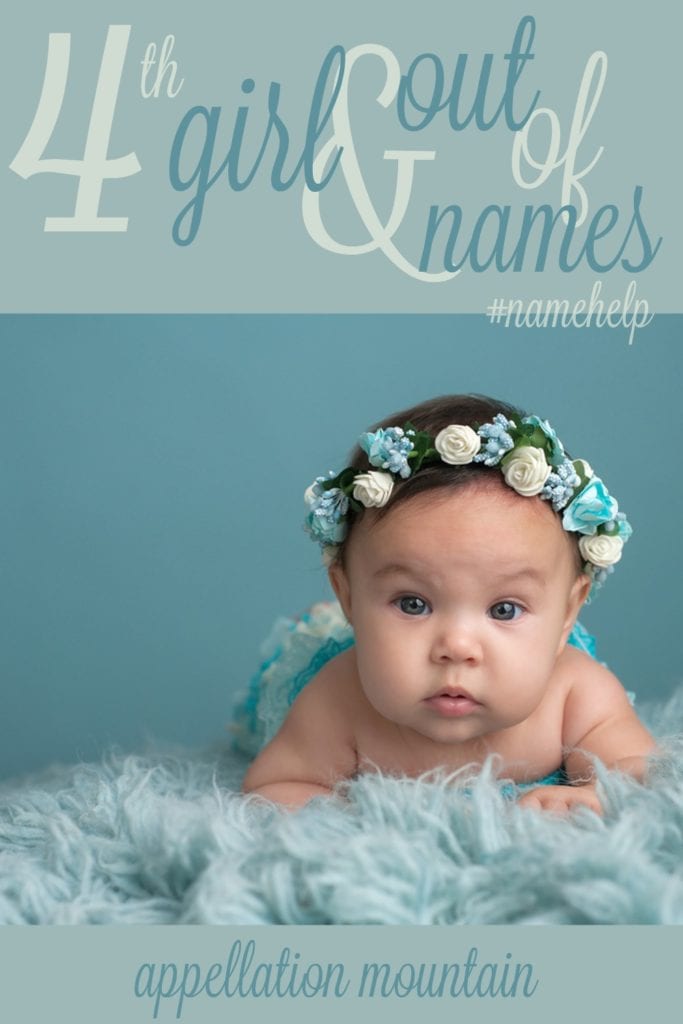 We have three beautiful daughters, and recently found out that – surprise! – we’re expecting a fourth. It’s another girl. When it comes to names we have two problems: first, we don’t really have any names left that we like. Plus, we always seem to choose names that end up being the next big thing.

We still like all of the names, but it’s frustrating to hear every new baby at church or in our neighborhood called Amelia, Evelyn, or Stella.

Names we’re considering this time include:

Our last name starts with a K, and is shared by the 35th President. No relation! But the JFK connection means that we can’t really use ends-in-y names, though I loved Lucy and Ruby before I met my husband. Also, names of famous family members are out – so no to Caroline.

We aren’t big on nicknames.

I think many parents struggle with this problem. When we start picking out names, we’re ahead of the curve. But then the world catches up, and our favorites suddenly feel so popular. Plus, the names we’ve already used tend to rule out others, like Amelia and Cecilia.

Okay, let’s jump into some suggestions.

Beatrice – A late nineteenth and early twentieth century favorite, Beatrice teetered on the verge of extinction for years. Now the name is staging a slow comeback. It still falls outside of the current US Top 500, but it feels like a match for Amelia, Evelyn, and Stella. Bonus? No repeating initials! (In fact, I’ve avoided A, E, and S throughout this list.)

Gemma – Gemma seems very similar to #1 favorite Emma, and yet the soft G sound makes it entirely different. The name has gone from completely unknown to the Top 300 over the last decade; and yet, I think it remains just under-the-radar enough.

Georgia – Everybody recognizes the name Georgia, and nearly everyone likes it, too. Despite that fact, Georgia’s march to the top continues at a slow, steady pace. It’s just inside of the current Top 250. Like Beatrice, everyone knowns the name, but not everyone is choosing it.

Josephine – If your daughters Amelia, not Mia, and Evelyn, not Evie, then maybe you can have a Josephine, not Josie or Fifi or Fina or Jo. I really like this name in full. It’s not far outside of the current Top 100, so Josephine might be the next Amelia.

Lena – Spare, sleek, and portable, Lena hides in plain side. We all know famous women by the name (Dunham, Horne), and it reminds us of faded favorites like Gina and Tina. But Lena remains versatile, modern, and very wearable. It’s in the current Top 300, like Gemma, which seems a nice place for a familiar, but seldom heard, choice.

Louisa – Literary Louisa recently returned to the US Top 1000 after several decades’ absence. That puts Louisa in the same barrel as Beatrice. Everyone knows it, but relatively few of us have named a child Louisa lately. For an even rarer name, you might consider Louise. Both remind me of Eloise from your list, but sidestep the repeating initials question and give you a less popular name.

Mabel – If you like Hazel, maybe you’ll love Mabel. It’s another name long out of fashion, but recently returned. Mabel is still outside of the current Top 500, but sounds exactly like a sister for Amelia, Evelyn, and Stella.

Matilda – Or maybe Matilda? Like Amelia, it’s a longer name that can easily be nicknamed – but requires none. It’s regal, like Charlotte, and vintage, like all of the names that you love. It also falls just beyond the current Top 500.

Overall, I most like the idea of Beatrice or Louise – even though it isn’t technically on my list above. Josephine also calls to me, but I’m ambivalent about using a nickname-rich name like Josephine when you’re not wild about them. Because children do grow up and decide that they’d rather be Josie or Jo … would that bother you?

Readers, I’d love to hear your suggestions of vintage names that feel undiscovered? Or at least are yet to take over the playgrounds!