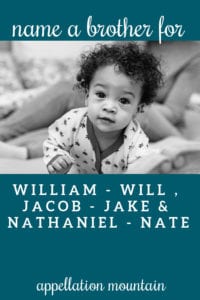 We have three boys, and we’re expecting our fourth! Our sons all have one-syllable, four-letter nicknames: Will (William), Jake (Jacob), and Nate (Nathaniel).

It’s not something we planned, but we’d like to stick with it for this baby, especially as he’ll be our last.

We could use some help with our options. So far, we have:

Nicholas – My husband’s name. Probably not a junior. We could call him Cole, which I love. But would people want to call him Nick?

Our last name is Italian, like man-C-knee. Because of that, we’ve ruled out M names. We like names that are traditional, but not old-fashioned, and easy to spell and pronounce.

If we weren’t going to worry about the four-letter part, I like sound of Benjamin, though we know two under two, so maybe we’d feel like it was taken.

That symmetry with formal names and short nicknames is so pleasing. Keeping the pattern makes sense to me!

And yet, I’m surprised at how few options I found.

Part of the challenge? Will, Jake, and Nate are Top 100, mainstream favorites. By definition, there are only so many possibilities at that same general level of popularity. At first glance, Pendleton-called-Penn fits … except it doesn’t, not really.

I do think Nicholas-called-Cole works. Yes, it will take some repetition, and some people will default to Nick. But there’s some magic to saying, “Oh, my husband is also Nick, so we call him Cole.” But does that feel satisfying to you? Or is the (occasional) hassle something you’d rather avoid?

Now on to Finn: would you consider Fintan, Finan, or Finnian? They’re all Irish. But I think Finnian man-c-knee is less of a mismatch than Finnegan man-c-knee. (Maybe?) Another thought: Griffin “Finn” man-c-knee. Though, as with Nicholas-called-Cole, Griffin-called-Finn isn’t as automatic as your older sons’ nicknames.

On to some more possibilities!

Andrew, called Drew – It’s classic and, while you might get the occasional Andy, Drew is very well established, too.

Beckett, called Beck – Will, Jake, Nate, and Beck sound like they should be out riding horses together somewhere. But maybe Beckett is too much of a departure from the more traditional William, Jacob, and Nathaniel?

Gabriel, called Gabe – One of the first names that came to mind, particularly because it’s such an automatic short form.

Grayson or Greyer, called Gray or Grey – I think these names have tons of potential, but again, they’re a little outside of your usual style.

Lucas or Lucian, called Luke – Luke doesn’t require a formal name, of course. But plenty of options exist, and I think Lucas-called-Luke is the most obvious choice if you rule out Cole and Finn.

Raphael, called Rafe – Raphael isn’t terribly common in English, but the name counts as a classic, and Rafe fits well with your older boys’ names.

Zachary, called Zach – Zachary peaked a few years ago, but it still feels like a solid choice for a son.

Ezekiel, called Zeke – The more current alternative to Zachary/Zach, but maybe a little on the different side.

Overall, my top pick is Lucas-called-Luke. It’s popular, yes. But I’m assuming you meet lots of other children with your sons’ names, and don’t mind at all. And you shouldn’t! They’re strong, solid choices – popular names catch on for a reason.

I also appreciate the way that Luke has a completely different vowel sound that Will, Jake, and Nate. And while it repeats the ‘k’ ending of Jake, I think Luke and Jake sound very different.

Readers, over to you! Can you suggest some traditional four-letter boy names with built-in longer forms?