My husband and I are expecting our first child in September and do not know the baby’s sex, but are having a hard time finding a boy’s name.

We are both über-popular-name averse. We’re in our early 30s and do not want names that sound like those of the people we grew up with or a name from our parents’ generation. We don’t want one that sounds too trendy, either – so nothing that rhymes with Aiden!

While I grew up in the US, my husband was born and raised in Germany. We need to consider the pronunciation of any name, as well as its popularity there.

Js are pronounced like Ys and Ws like Vs. Our surname starts with S, which means a first initial S is out of the question, because the initials would immediately be perceived as SS.

Names we considered, but ruled out because they’re very common in Germany include Luca and Felix.

Names I love are Clive, Clyde, Clark, and Kit. But a friend has a Clark, so that’s off the list. And I’m not sure about Kit. I do not like Christopher, and I’m concerned about it being such a short, gender ambiguous name.

Read on for my answer – and please share your helpful thoughts and suggestions in the comments!

Oh, I’ve been through the but-how-does-it-sound-in-another-language baby name debates. It’s tough enough to choose a name in one language, but two? Definitely ups the complexity.

So we’re looking for a name that: 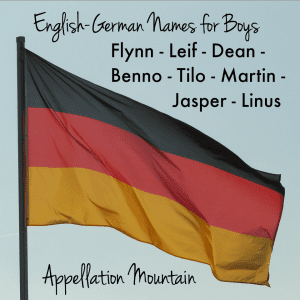 There’s no official popularity list in Germany, so I referred to this website’s Top 500 of 2014.

When looking at naming across cultures, I tend to look at the non-English language first, and consider which names would work well in English.

Why? American English is an anything-goes language when it comes to baby names. Many other places aren’t so accepting. First Names Germany spells out the regulations that would apply if your were naming your child there – clearly gendered, no surname names, nothing “absurd.”

I know someone in a similar situation who ended up with Nicholas – never Nick. I think it’s easy to veer towards the classics when crossing languages, but there are plenty of other possibilities, too.

Wow! That’s a lot to take in, and no wonder you’re having trouble coming up with The Name. Let’s take a look at some options.

Flynn – Finn is a phenomenon in the US and Germany, but Flynn is less common both places – in the mid-300s in Germany, and #659 in the US in 2014. On the downside, Flynn would almost certainly be mistaken as Finn, at least some of the time. And yet, it’s a short, complete name that works in both languages. It has the “F’ of Felix, and the brevity of Clark and Clive.

Leif – I’ve heard that Old Norse/Viking-inspired names are considered rather stylish in Germany at the moment. Some of them could almost fit your criteria – like Kjell – but I’m not sure how wearable Kjell would be in the US. Leif, on the other hand, is perfect – rare, but familiar. Leif ranks in the mid-200s in Germany, and was #998 in the US in 2014.

Dean – Clive, Clyde, and Clark make me think of Dean. It violates one of your rules – Dean peaked in the 1960s, possibly inspired by the late James Dean. And yet, Dean is back in the US, charting at #221 in 2014. In Germany, it’s a Top 200 name. It is the kind of choice that feels both retro and current – kind of like Clark.

Benno – I wonder what you’d think of a name that’s just a little bit different? I’m sure Benjamin is too popular for you – the name ranked #12 in the US last year. Benno hovers around the 200 mark in Germany, but is just about unheard of in the US. That could change – we’re all about ends-in-o names for boys, from Leo to Arlo. And if your Benno prefers to be just Ben, well, he’d blend in with all those boys called Benjamin and Bennett and Bentley. But Benno remains a style stand-out.

Tilo – Here’s another name from the same category as Benno. It’s the one SwissMiss blogger Tina Roth Eisenberg gave to her son. As she explained, the ‘i’ sounds like the ‘i’ in Tina. Tilo ranked #211 in Germany, and is just about unknown n the US.

Martin – If you’re drawn to names like Clark and Clyde, I wonder if you’d consider Martin? Martin is in style-limbo in the US, which doesn’t make a whole lot of sense. It’s a two-syllable, ends-in-n name, just like Mason and Logan. It has a long history of use, just like William and Charles. And, for your purposes, Martin is well-travelled, a name that works almost anywhere. Martin currently ranks #149 in Germany and #261 in the US. I’d say Martin strikes a nice balance between timeless and retro. Another name in this category? Peter.

Jasper – Okay, remember my question about whether the name has to be almost identical in both languages, or simply pleasing in German and English? Jasper is why I asked. Jasper is #148 on the unofficial German list. It’s currently #218 in the US. That seems like a sweet spot for a name that is appropriate for a child born in 2015, but not very popular.

Linus – One of the challenges with names like Jasper and Flynn is that they’re likely to be more popular in the coming years. So a name you choose in 2015 could violate your no-very-popular-names rule by, say 2018. I’m tempted to look for something even more obscure for you. Linus is one of those names that feels incredibly on-trend but ridiculously underused. It’s not even in the US Top 1000. Of course, Linus is #42 in Germany – possibly too popular for you.

Do any of these feel closer to what you’re looking for? I think Dean might be a really strong possibility – it has the same style as Clark and Clive, but seems to work well in both languages.

Readers, what would you suggest for a boy’s name that works in English and German, but isn’t too trendy or popular in either language?