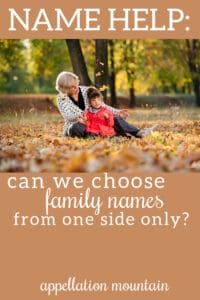 Update: After realizing that different forms of Michael appeared in both families, as first and last names, we gave our son the middle name Michael. We intend to use this as the middle name for our future children, too. Maybe it wasn’t exactly the kind of family name we imagined, but it’s a family name now! Thanks for all the insight.

I have an amazing partner in life, and we’re about to become parents.

For some very painful reasons, my partner, K., has very little contact with his family. They live on the other side of the country. We talk on birthdays, major holidays, etc., but that’s about it. There are some cousins in the family that he’s a little bit closer with, but no one we see.

It probably goes without saying that we’re not going to use family names from his side of the family for our children.

But does that mean we can’t use names from my family? My family is warm and loving and they are a big part of our life.

K. likes the idea of giving our child a name from my family. But I’m not so sure. Becoming parents could create a lot of drama with K.’s family, and this seems like one more thing. Except that I do agree with K. – it would mean a lot to honor the people who have loved and supported us over the years.

Families – sigh. We picture something straight out of Norman Rockwell, but often what we get is nowhere near that simple.

In a perfect world, the answer is this: if you’re using family names from one side for the first child, the other side should – ideally – be honored when and if a second child comes along.

But there are a million exceptions to this rule. Plenty of families only use an honor name for the firstborn, often the firstborn son. Other families don’t plan to use honor names at all, but then a loved one passes away during a pregnancy – and suddenly, it just feels right to name baby #3 after uncle Jack. And, of course, when families are estranged – or even kind of sort of mostly estranged – that’s yet another situation.

Ultimately, you should choose names that you love, and if that means passing down your beloved grandma Beulah’s name to a daughter, then that’s what you should do. But let’s consider a few scenarios.

In the Middle Spot

If you’re tucking the name in the middle spot, it’s much less painful. Assuming you’re not sending custom-printed birth announcements to K.’s family, they may never quite realize that Noah William got his middle name from your grandfather.

Actually, if we’re talking names like William, James, Elizabeth, or Anne, you probably could send an engraved birth announcement and not fret that the family name choice was obvious. Evergreen classics are so familiar that no one pauses to ask if Joseph is a family name.

I’m not sure whether to suggest this, because it’s clear that the situation with K.’s family is far from ideal. But might there be a family name that isn’t the name of an immediate family member?

I’ve known couples who liked the idea of family names but had reasons to avoid the names of their parents or grandparents. A great-grandmother’s maiden name or the name of a long-ago ancestor might provide inspiration.

You won’t have a personal relationship with such a distant ancestor, of course, but if you’re looking for a sense of connectivity to the past while sidestepping the difficulties of your current relationships, it’s one approach.

What will you tell your child?

Right now, you’re worrying about how your families will react, and that makes sense.

But fast-forward a dozen years or so. How will you explain to your children that they’re named for grandma and grandpa J., but not the K. family?

If you can imagine having that talk, and thinking about how you’d explain it, it might help you make up your mind. It might be satisfying to say, “We were very close with grandma J. when you were born, so we named you after her dad.”

For what it’s worth, my children both have family names. And they seem to thoroughly enjoy repeating, “I’m named after …” It has not occurred to them that they could have been named after another relative, but maybe that’s coming.

Ultimately, I think the solution is this: honor names should reflect the people who are important to you as a family. If those names happen to come from your side of the family only, that’s okay.

It’s fine if you feel like a blank slate is the best solution. But if you feel strongly – and it feels like your partner does – that family names are important, then you shouldn’t feel like family tensions take them all off the table.

Readers, what would you do? Start with a blank slate? Honor one side of the family now, and worry about the rest later? Or look for a compromise name from the other side, too?