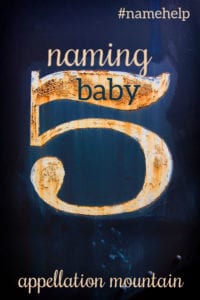 It’s time to name baby number five! Gender will be a surprise.

Middle names are family names, so we’re looking for first names only. It would be ideal to not repeat a first initial.

Matilda, called Mati/Mattie is one possibility for girls. Right now, there are no boy options!

Here’s what leaps out at me: like lots of families, the boys’ names feel like a different style than the girls’ names. That’s completely fine – and fairly common! But it means we’re looking for two different kinds of lists.

The boys’ list needs names that are modern, masculine, and nickname-proof.

For girls, we’re after something slightly more traditional and elaborate, but with a spunky, maybe boyish nickname. Matilda called Mattie – or Tilly or Millie? – could be perfect, but there are lots of options

In both cases, we’re avoiding names that start with A, B, R, or S.

Cordelia called Cory, Cordy – Cordelia could shorten to lots of things – Cora, Della, Delia. But Cory feels like the kind of upbeat, boyish nickname that goes with Sam/Sami and Allie.

Francesca called Frankie – Frances might lean a little more traditional, but Francesca has the same elaborate, romantic feel as Alexandria and Samantha. Plus it’s slightly more mainstream than Matilda, so maybe it will appeal more?

Giovanna called Gia, Gio, or Gigi – I suppose Giovanna might seem very Italian – possibly too Italian if your roots don’t correspond? But I hear it more and more on girls whose families don’t necessarily traces their families to Naples and Rome and Milan. Plus the nicknames are spectacular!

Josephine called Josie, Joey, or Jo – My very first thought! It seems like the logical choice to complete this set of sister names.

Louisa, Lucinda, or Lucia called Lulu, Lou, or Lucie – There are plenty of lovely Lou/Lu names for girls, and several nickname options that feel like they’re from the same category as the older girls’ names.

Nicola called Nikki – Okay, Nicole has firmly entered mom name territory. I get it. It’s the name of my friends. But how ’bout Nicola? It’s just different enough that it might appeal for a twenty-first century girl.

Victoria called Vica or Tori – Victoria is a powerful, classic name that’s quite popular now – but it’s not nearly as much of a chart-topper as Charlotte. Vicky strikes me as belonging to an earlier generation, but Vica and Tori feel more current. My other favorite? Victoria called Rory! But I wonder if that’s too much of a stretch?

Camden – I noticed you haven’t used a C name yet! I’m tempted to suggest lots of options, like Cameron and Cash. But I Camden seems like the obvious two-syllable, ends-with-n option to go with Braden and Rylan.

Donovan – Or maybe the reason nothing is sticking is that it’s time for something just slightly different. In that case, one approach might be the three-syllable Donovan.

Everett – Or maybe a different ending? Everett sounds current and cool, doesn’t repeat a syllable, and is just a little bit different than Rylan and Braden, but still sounds like it belongs to the same family. I’d likely suggest it with Alexandria and Samantha, too, which feels like a bonus.

Holden – Like C, I can think of lots of appealing H names. Hayes would be something just a little different, but Holden – and Hudson! – seem like good options that are more faithful to Rylan and Braden’s style.

Kieran – Like Everett, I can imagine suggesting Kieran as a brother for all four of your older children – I think it splits the difference, style-wise. One thing that makes me hesitate about Kieran: it might be a little more subject to misspellings. (It’s Irish originally; Ciaran is the original spelling and Kieran the Anglicized one. But I can imagine lots of possible options. Does it bother you if Braden is written Brayden? If so, I might not consider Kieran.) But that consideration aside, I think it’s a great choice.

Parker – I like the idea of an r-ending name with Braden and Rylan, too. There are SO many options, but Parker stands out as a letter you haven’t used, and something that doesn’t sound anything like your older kids’ names, while still fitting right in.

Walton – Lots of two-syllable, ends-with-n boy names are wildly popular, like Mason and Jackson and Logan, too. But Walton doesn’t even make the current US Top 1000. (Which is crazy, right?) So if you’d like to find something that your son will never have to share, this might be it. There are lots of W surname to consider, too. This is my favorite for you, but there’s more on this list.

Overall, I like Everett for a name that pairs well with Braden, Sami, Allie, and Rylan. Or maybe Wyatt? And for a girl, I’m still stuck on Josephine called Josie (or Joey or Jo) as the obvious choice.

But I know there will be some great suggestions from the readers, so let’s open it up!

What would you name a sister or brother for Braden, Samantha (Sami), Alexandria (Allie), and Rylan?