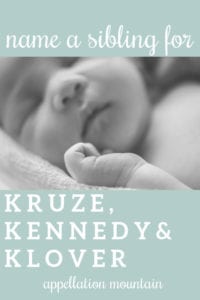 Hello! We are having a bit of trouble deciding on a name. We are not sure if baby is a girl or a boy, but we love Kamp for a boy but cannot find a great middle name. (Or if you have another K boy suggestion, too!)

We also cannot think of a girl K name that fits our family and is still unique. (I know, the never ending request of unique names, haha.)

Siblings to baby are:

Would love your help!

Congratulations on your new baby!  Let’s work through these questions one by one.

KAMP: THE BOY NAME TO BEAT

I’m thinking about Kamp. On the one hand, it fits your family perfectly. On the other hand, I think it sounds a little less name-like. Not because of camping, which seems outdoorsy and positive, an active sound like Kruze. But there’s also camp, as in a synonym for exaggerated or outrageous.

So I think Kamp needs a solid, traditional middle name to anchor it, just like Kruze’s middle name, Mark. But it’s too easy to choose a middle that brings to mind a famous, real-life destination. (Kamp David is out.) Still, I think that’s the general vibe – a strong, masculine classic.

I’m tempted to suggest other K names, but I feel like you’ve probably already considered Kingston, Kase, Kade, and lots of other obvious choices. One possible substitute is surname Kemp – which means champion or warrior. But I suppose Kemp would be misheard as Kamp, too, so I’m not sure it’s a better choice.

For a daughter, we’re probably looking for a word name, surname, or another choice with a modern vibe, right? Kennedy seems like the most common of your kids’ names; Klover feels like you’ve probably never met another.

Since we’re looking more for Klover names, would you consider:

Kairi – It might mean ocean, but it comes from the Kingdom Hearts video game series. My first guess was that Kairi sounded like Carrie, but it actually sounds like Ky-ree. After all, Kai rhymes with Ty.

Kamber – It’s sort of like Amber-with-a-K. It works nicely with Kruze, Kennedy, and Klover, but could rule out naming a future son Kamp.

Karis, Karys – Carys is a Welsh name meaning love; Charis is an ancient Greek name meaning kindness. Karis might be an update of either, rhyming with Paris.

Kerrigan – It’s a surname name. Parents might connect it to Olympic figure skater Nancy Kerrigan (and the scandal that followed), but I feel like that will be ancient history for a child born in 2020. (No, really. It was 25 years ago!)

Kerith – Kerith is the name of a brook mentioned in the Bible. There’s also a lake in Iceland by the name, but it doesn’t seem to be related. It’s very rare, but I think it has the same interesting, unexpected sound as Klover.

Kestrel – A type of falcon, and a bird name that feels fierce and feminine.

Kiernan – Kiernan Shipka’s name is Irish. It means, roughly, little lord – as in ruler. I always thought it might catch on, thanks to the actor. So far, it hasn’t … and yet, I think that’s exactly the vibe you’re going for. Kennedy, Klover, Kiernan … love it. Kieran is an option, too, but it’s more common for boys.

Overall, my favorite is Karis/Karys. There’s nothing quite like it. The meaning is great. And spelling it with a K rather than a C might simplify the pronunciation. Plus, it doesn’t sound anything like Kennedy, Klover, Kruze, or Kamp – so it seems like it would add to your family without ruling out using Kamp in the future.

One last thought, though – if you think this child might complete your family, I wonder if you’d consider Kampbell for a girl? I’m working on the assumption that you might like to reserve Kamp for the future, but maybe that’s not the case.

Okay readers, over to you – let’s find some daring K names that work well with Kruze, Kennedy, and Klover!