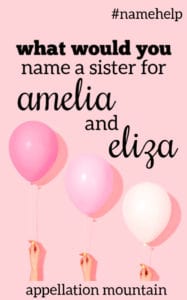 We have two sweet girls, Amelia Jane (8) and Eliza Leigh (5). We thought our family was complete, but surprise! Our new little one is due in April.

If it’s a boy, his name will be Oliver Reese, a name we’ve had picked out since we were expecting Amelia.

But if it’s a girl, we’re not sure where to begin.

I guess Olivia is the logical choice if this baby is a girl, but we know three other girls with the name already. We don’t mind popular, but we don’t want to feel late to the party, if that makes sense.

Sophia might work, except it’s the name of my husband’s grandmother. We haven’t used family names, and I think it would be awkward to do so now, and impossible to say that it wasn’t after her.

Friends have suggested names like Eliana and Ariana, but they don’t feel right.

Where do we start?

How exciting to be expecting baby #3! I think Oliver is perfect with Eliza and Amelia.

And yet, I know what you mean about being late to the party. It’s one thing to know that your child’s name is popular in theory, but it’s another thing to know other children who already have the name. Even when there’s no practical concern about duplication, it can still take the shine off a former favorite.

What you’re looking for seems pretty clear – a traditional girl’s name, feminine in style, popular circa 2020, but not necessarily pegged to this decade. I suspect that’s the issue with Eliana/Ariana … they feel a little newer than the vintage-style names you’ve used for your older girls.

Interestingly, the pool of names that fits your criteria isn’t all that deep – at least if we’re sticking to relatively common choices. And because many of them share sounds with Eliza and Amelia, lots of them are immediately ruled out.

Because there’s a d/t sound in your surname, I also found myself ruling out names like Charlotte and Adelaide, because I wasn’t sure if you’d like the repetition. (I object to it less in Adelaide Heart-with-a-y; more in Charlotte Heart-with-a-y, but that might come down to personal preference. Both could be a little hard to say.)

But I did come up with some suggestions I think work beautifully with Amelia and Eliza.

Clara – It’s shorter than Amelia and Eliza, but shares the same vintage-with-roots style.

Felicity – I know you’re concerned about ends-with-y names. And I’d agree – Lucy or Ruby is sing-songy with Heart-with-a-y. But a three-syllable name? It makes for a far more pleasing cadence. Rosalie, Natalie, Dorothy … I think lots of them have potential. But I liked the light sound of Felicity best with Amelia and Eliza.

Fiona – Nothing sounds quite like Fiona. Well, maybe Top Ten staple Sophia. But you’ve already ruled that name out.

Josephine – After I’d ruled out Charlotte, I immediately thought about Josephine. It’s traditional, and while it might be a little more tailored than Eliza or Amelia, I think it sounds like the perfect sister name.

Louisa – Not only are Eliza and Amelia both three-syllable, ends-with-a names, they share a strong L sound, too. Given that, I feel like Louisa is the logical suggestion. I don’t think they’re too close for sisters, but it’s worth saying the names together five times fast!

Lydia – Along with Louisa, Lydia feels like an obvious name to consider. I think the ‘d’ in Lydia is the right amount of repetition with the t/d sound in your surname.

Susanna/Susannah – I’m not sure if Susanna ought to be on this list because it’s not even in the current US Top 1000. On the other hand, isn’t it just bananas that Susanna doesn’t make the Top 1000? It sounds great with your surname, and your girls’ names.

Victoria – Regal and strong, but also flowing and pretty, there’s lots to love about Victoria. I love it with Amelia and Eliza because it sounds compatible, but doesn’t risk running into your girls’ names. It’s distinct and distinctive.

Overall, I love Louisa – if you don’t mind the repeating sounds in Amelia, Eliza, and Louisa. (I find it just enough repetition to be charming.)

But Josephine remains my favorite. I think it matches the style of Amelia and Eliza best, with a certain spirited vibe.

Readers, over to you: what would you name a sister for Amelia and Eliza? 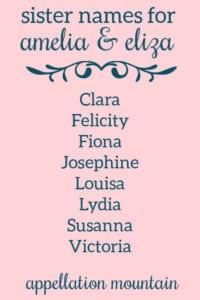