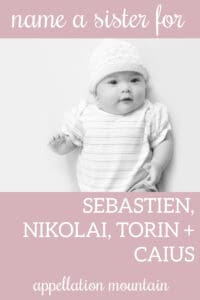 You helped me name my son Caius back in 2019. We already had sons Sebastien, Nikolai and Torin.

I’m pregnant again, this time with a girl. Everyone says it’s easier to name girls because of all of the options but I’m finding the opposite to be true for the same reason – too many options!

I’m guessing this may be the last time I get to name a baby so I’m just trying to find something perfect. So far I’ve liked more traditionally feminine and strong names with potential nicknames that lean more masculine.

I’m literally keeping myself up at night trying to find the perfect for us name. Any help you can provide would be MUCH appreciated!

Congratulations on baby five! And how exciting to be expecting a daughter!

I do think that naming the opposite gendered child can throw us for a loop, especially if we have a good style and strategy already. It’s completely normal to want something slightly different for a daughter than a son.

And, of course, naming is that rare parenting task that doesn’t really get easier with experience. In fact, it can get harder! (I was on the final draft of this post before I realized I couldn’t suggest Corin as a sister name for Torin …)

So I think it’s amazing that you’ve got such a strong start.

Your kids’ name lean a little European, have rich meaning and history, and are rare but accessible.

It’s a very specific combination. Throw in the need for a pleasing nickname, and there’s a lot to consider. Though I agree – the issue here is how MANY names could potentially work.

A few other things jump out at me:

I’m inclined to agree about Rune – great name, but as a middle.

Ferron/Ferryn might belong as a middle, too. I’m only familiar with Ferron as a short form of Ferdinand. (Though Ferron, the singer-songwriter, pushes this in a more unisex direction.)

Marielle might be a little too frilly for your style, maybe? Though I wonder if nickname Miri would save it for you? I do think it’s a great match with your sons’ names.

Emrys, Evadne, and Evanthe seem perfect. But does the potential for your daughter to blend in as Emmy or Evie give you pause?

That leaves Talise/Tala, but I think it’s worth looking farther afield.

A SISTER FOR SEBASTIEN, NIKOLAI, TORIN, and CAIUS

It’s a little frilly, but could be Morie for short – or Ret/Rette?

I’d suggest Avi for short. Aveline means hazelnut. It’s feminine but not frilly, shares the V of Evadne and Evanthe, but edges a little closer – maybe – to Marielle in terms of style.

Dominic is a masculine name traditionally given to boys born on Sunday. Dominique and Dominetta are among the feminine forms. And Domino emerged as a nickname for those feminine forms. Of course, it’s also a game piece. But I’m not sure that lessens the name’s appeal.

An uncommon form of Elizabeth used in the Middle Ages, Isabeau has history aplenty. It also offers boyish nickname Beau.

Briefly mentioned as a feminine name in the New Testament, Persis means “from Persia.” But it’s a tailored, surprising name for a daughter than shortens to Percy or maybe Perry.

This one comes from Edgar Allan Poe. C in DC mentioned that Tamerlane might be a male character, but it has potential as a girl’s name. I’d short it to Laney or Lane.

Another rare name from the Bible, this time the Old Testament. Vashti offers no obvious nicknames except for Vee, but it does sound terribly appealing.

While Yvaine is a newer name, it has deep roots. Neil Gaiman made it famous as the name of Stardust’s heroine. It’s based on Yvain, a name from the legends of King Arthur.

I keep coming back to combinations like Vashti Ferryn Rune and Isabeau Emrys. From your original list, though, I do love Marielle and Evadne. I wonder if Evadne Marielle Rune is a contender?

Let’s hear what others have to say, though.

Readers, what would you name a sister for Sebastien, Nikolai, Torin, and Caius?