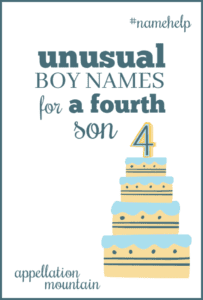 UPDATE: He’s here! Welcome Caius Adrian Wolf! Thanks to all for the suggestions.

Our three boys are Sebastien, Nikolai (Niko), and Torin (Tor/Tori).

I am looking for a unique (definitely not top 500, preferably not even top 1000) but not too “out there” name for our fourth son. The name should have good nickname potential. I’m not too worried about it “going with” my other boys’ names.

Congratulations on your fourth son!

When I look at your list, I see this: as you’ve become a more experienced parent, you’ve realized that it’s tough to find a name that really stands out. Sebastien and Nikolai are a little bit different, but only a little. Torin comes closer to a stand-out choice. Lots of names on your list lean more popular than Torin – Lachlan, Flynn, Callum, Callen. Others might be experienced as nearly unique, like Aros.

But there’s something else that strikes me about Sebastien, Nikolai, and Torin. They sound pan-European. Not classic, exactly, but not novel, either. I can imagine finding any of those names in the pages of history books. They’re a little bit romantic, and while you haven’t deliberately tried to match, I think they do sound like brothers.

Which makes me wonder this: Truman and Thayer sound like very different names. They’re a little more buttoned-down, maybe even more American. (I don’t say that as a bad thing at all. Just a different image.) And while nothing says you can’t choose a name with a different style profile, maybe that’s why none of them feel quite right? Because they’re great names … but maybe not great names for your family.

Ayrton, Emeric, Emrys, and Cassian seem like the best fits. I’m particularly drawn to Cassian for you. While it’s very uncommon, it’s appeared in a handful of high-profile uses. It’s a minor character (Astrid’s son) in Crazy Rich Asians. It’s also Diego Luna’s hero in Rogue One: A Star Wars Story. While that’s resulted in a big bump in use, Cassian remains well outside the current Top 1000. I think it’s unusual, but not too out-there. And it shortens to Cass, Caz, or Cash.

Let’s consider a few more possibilities, none of which rank in the current US Top 1000:

Eben – Charles Dickens made Ebenezer famous, but I think Eben might be the more appealing option.

Evander – Sebastien and Nikolai are three syllables, so maybe a longer name would appeal? Plus, Evander has a different ending sound than Sebastien/Torin and Nikolai, so it mixes things up.

Finnian – Flynn made me think of other, unexpected Finn names, like Finnian.

Leopold – Maybe this is too out-there. Except Leo names are having a moment.

Maceo – Would you mind another o-ending name? Because this rare twist on Matteo could wear nicely.

Rhodes – Thinking about ending sounds that you haven’t yet used, are -s ending names an option? I love the idea of Rhodes with Sebastien, Nikolai, and Torin.

There are so many great, underused names for boys – I could go on and on! But I think this is a good time to pause and aske the community:

What would you name a brother for Sebastien, Nikolai, and Torin? 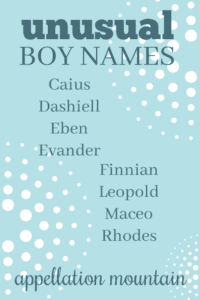