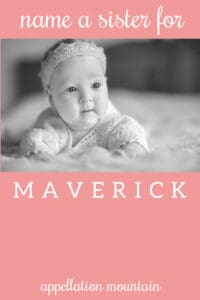 My husband and I are expecting a daughter together in March. She is my first child. My husband has a 7 year old son named Maverick Dillon from an earlier relationship. Maverick’s mom has two younger children: a girl named Mylah and a boy named Zion. We live in the same area, so the kids will likely spend time together, at least occasionally.

I’m not really sure how to think about Maverick when it comes to choosing a name for our daughter. I know it probably rules out Maeve, a name that I love. But I don’t want to “match” Maverick, and I don’t think I have to, right? And should Zion and Mylah’s names be considered in my decision? I do like Zara and Zoe/Zoey, but maybe I shouldn’t even think about Z names? I’m definitely avoiding M names.

So far, my husband says the decision is up to me and I think that’s probably not going to change. The only name he has suggested is Paisley, which is okay for someone else, but I don’t really like it.

Blended families take some extra effort, and there’s not always a perfect answer for some of these questions.

But when it comes to half-siblings, it sounds like you’re taking the right approach. Don’t make an effort to match an older kid’s name if that’s not your style, but do choose names that don’t conflict.

This is true even if the age gap is significant, or the children will rarely spend time together. For many families – like yours – it’s matter of making daily life run smoothly, too. Maverick and Maeve would be awkwardly close. Not unworkable, no. But unless there was a reason that Maeve had to be your daughter’s name, I’d encourage you to keep looking.

And you are – perfect!

I think you can give the names of Maverick’s half-siblings less consideration. Sure, they’ll be thrown together from time to time, like maybe at their mutual brother’s birthday parties. That said, Zora and Zion? I wouldn’t raise an eyebrow.

Still, it sounds like you’d rather avoid them – and that’s fine, too.

So let’s brainstorm some names loosely based on Zora, Zoey, Maeve, and Paisley.

An alternative to Zora, Cora feels a little more traditional. Maybe it’s because we’ve swapped the Z for a C. Or maybe it’s the Downton Abbey association.

Zoey has been powerfully popular for years. Daphne is beginning to catch on now, a Greek import with style to spare.

Yes, it’s Emma-with-a-G. But it’s been used for girls in Italy for ages. (The author Dante Alighieri’s wife was Gemma, which takes us back to the fourteenth century.)

Originally short for Elizabeth, Eliza feels brief and complete. Like Maverick (and Zion), it has a high value Scrabble letter. But lively Eliza also feels gently old-fashioned, in part because Broadway reminded us that it’s the name of Founding Father Alexander Hamilton’s wife.

It’s a surname name like Paisley, but Hadley reads slightly more traditional. That’s probably thanks to Hadley Richardson, the first Mrs. Ernest Hemingway. A fictional biography of Hadley titled The Paris Wife became a bestseller in 2011, pushing the name into wider use.

This name checks all the boxes. It’s a pretty shade of green, a word meaning wise, and an herb, too. It’s the best of Scarlett, Grace, and Rosemary, all in a single name!

The French form of Sylvia, but also a casual update to that 1930s favorite.

A lovely floral name, Violet shares the V of Maeve, but sounds nothing like Maverick. At the same time, it is another noun name, subtly connecting the half-siblings.

Overall, I wonder if Sylvie would appeal? It has the same V of Maeve, and hits the same traditional, but seldom heard vibe.

Readers, over to you! What would you name a sister for Maverick?