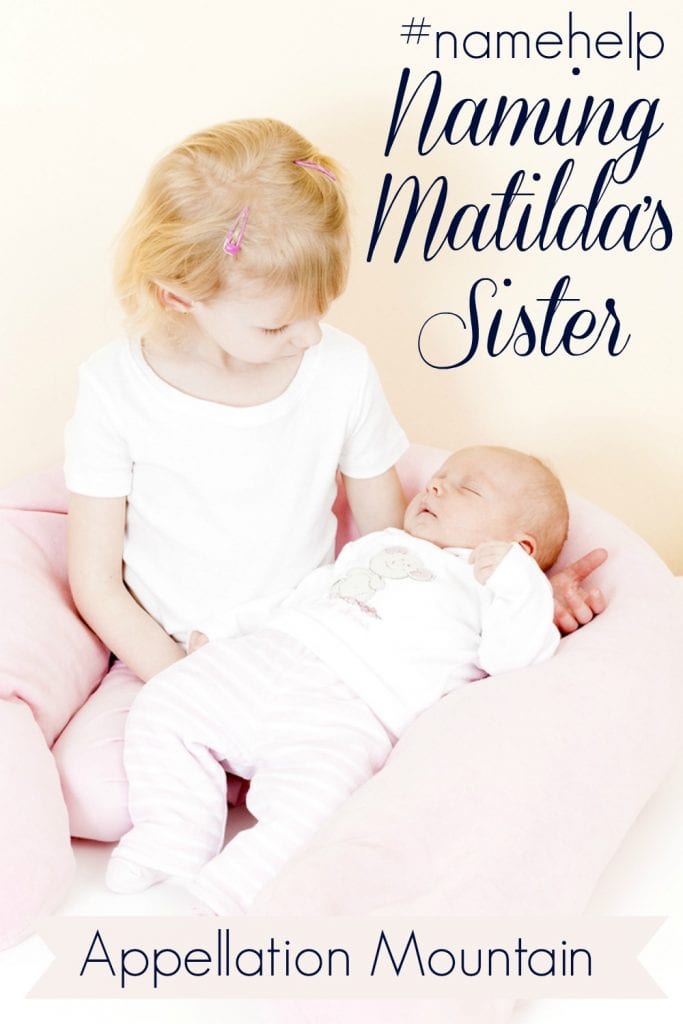 We are pleasantly pregnant with our second daughter. Sisters, how wonderful!
But geez, finding a name that holds up to the qualities of our daughter’s name has proven very difficult!
We are looking for a name that is not in the Top 100 (or 200 or 300 if possible), feminine, substantial and, frankly, as cute as Matilda. She is called Tilly, and we do love a nickname.
The name should begin with the letter B (first choice), E, or W because of religious custom.
We both love the name Hazel but it’s in the top 100 and doesn’t begin with our preferred letters, fail!
My husband doesn’t like Beatrice or Bronwyn. Matilda would love to call her Lulu as a nickname.
Please read on for my reply, and leave your helpful suggestions in the comments.
Hi Courtney –
How exciting to be welcoming a second daughter!
Choosing names can be tough when you have a specific list of requirements. Let’s recap:

Must begin with the letter B, E, or W, with B as the first choice.

Cannot rank in the current Top 100, and a name outside of the Top 300 is preferred.

A feminine name with substance and a cute nickname would be the ideal.

If possible, the nickname Lulu would be a bonus!

Is there any chance your husband might change his mind about Beatrice? Or possibly Beatrix? It hits all the notes, and sounds exactly right as a sister for Matilda. Plus, is there anything sweeter than sisters nicknamed Tilly and Trixie?
Okay, that’s not fair. I’m guessing if he was willing to consider the name, you might not be writing in!
Let’s brainstorm!
Eloise – Eloise currently ranks around the #250 and is rising. That’s the bad news. The good news? It’s an E name with plenty of history. Like Matilda, it has Germanic roots. And best of all? Lulu works nicely as a short form.
Briony/Bryony – Both spellings are in use, but while it’s familiar in the UK, it’s pretty rare in the US. Still, Bri- names for girls have fared well in recent years, so it’s not a stretch. The downsides: it’s much rarer than Matilda, and there’s not a logical short from.
Winifred – Winifred combines history and substance, with a great nickname – Winnie! It’s very rare in the US, but unlike Bryony, I think it would be familiar to many.
Bettina – Do you like Betty? It’s one of my favorites. You could certainly name your daughter Elizabeth and use Betty for short. That covers your preferred letters coming and going. But there are plenty of Elizabeth variations, like Bettina. Originally a nickname for Elizabeth, it stands on its own in 2017, a vintage, unexpected option.
Bernadette – Speaking of Betty, I’ve heard parents considering Bernadette, nickname Betty. Birdie works nicely for Bernadette, too – and I love the sound of Tilly and Birdie! Like Winifred, it’s a familiar name that isn’t at all common.
Bianca – Bianca, Blanca, and Blanche all mean fair. Blanche came first, a medieval French nickname. I think Bianca might be the most stylish today, boosted by the name’s association with Shakespeare, in Taming of the Shrew and Othello. Bebe would be a logical – and sweet – nickname.
Edith – Okay, back to the letter E. Do you like Edith, nickname Edie? Edith has Old English roots, and like Matilda, can be found in the history books. Tilly and Edie pair nicely together. Another bonus? Like Matilda, this name ranks around the #500 in the US. That makes it rare,  but widely known.
Everild – Like Edith, Everild has Old English roots. It also has a great, built-in nickname: Evie. It’s all-but extinct as a given name, but it has a lovely and appealing sound. Of course, there are lots of rare Ev- names for girls, as well as a few more mainstream options, like Evelina and Evangeline.
My favorite, hands down, is Eloise. It hits all the marks and gives you Lulu as a nickname. It matches Matilda perfectly, plus gives you the satisfaction of having your daughter help name her sister!
Readers, I know you’ll have more great suggestions. What would you name a sister for Matilda, called Tilly?