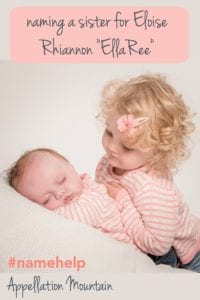 We have a sweet three year old named Eloise Rhiannon. Those were my top two favorite names, and I let my husband choose which one would be the first name. When she was just a few days old, we started using the nickname EllaRee. We didn’t plan to use a nickname, but she’s EllaRee 99% of the time now.

Now we’re expecting again, another girl. This is our second child together. My husband also has a son William Jr., called Will.

This time I really want to choose a name like EllaRee, but I’m having a hard time finding one.

We could use Kathryn – or Kate? – for my grandma. But if we give this daughter a family name, EllaRee will be the odd one out.

Every name I think of feels less special than EllaRee.

What do we name this girl?!

It’s often harder to name a second child. You’ve already used your favorite names, and that makes it tough. But it also sounds like lightning struck with EllaRee. You found two gorgeous names, as well as an adorable nickname that fits your daughter exactly right.

EllaRee is part-smoosh name and part-double name, but it’s also a real name formed from elements of your daughter’s first and middle. Ellery is cousin to Hilary, and traditionally masculine; meanwhile, Eleri comes from Welsh myth and is feminine.

I’m tempted to tell you that working so hard to duplicate the name causes needless stress. Maybe a name you just plain love makes the most sense here? And yet, combining names feels irresistible! I completely understand the impulse.

So with the caveat that you do not need to duplicate the structure of your older daughter’s name, let’s see what we can find.

EllaRee rules out most of the other names with strong -elle and -ee sounds, which often appear in smoosh names. For example, Kathryn Lee called Kaylee almost rhymes with EllaRee, and KatieLee definitely does.

Of course, KatieLee feels like a name a girl will outgrow. That’s not as true for EllaRee, so we’re looking for something with a high degree of wearability.

It’s also true that neither of your daughter’s names can be called “filler” – they’re not the familiar Lee/Leigh or similar names that easily combine with a first. So something like Anna Lee, called Annalee, feels rather spare compared to Eloise Rhiannon.

Let’s give this a try!

Louise Kathryn, called Louka or Luka – In most languages, Luka is used for boys; however, that’s not always the case. Using Kathryn’s ‘ka’ sound with Louise’s Lou seems like an option. But daughters named Eloise and Louise? That feels very close, so I’m not sure about this one.

Lucia Kathryn, called Luca – Eloise and Lucia seem like a better sister-set, so if you like the idea of Luca, Lucia Kathryn called Luca might be the more wearable choice.

Lilia Louise – One of my favorite smoosh nicknames is Lilou. It appears that Lilou started out in France, as a nickname for Liliane, but became an independent name thanks to the character in 1997’s The Fifth Element. (Though she spelled her name Leeloo.) Using Louise in the middle spot makes this nickname more obvious.

Mae Eleanor, Marguerite Elodie – I know I said that most -elle names were off limits, but I can imagine sisters called EllaRee and Mariel. Mariel started out as an elaboration of Mary, or possibly a combination of Maria Isabel. But you could reach Mariel via nearly any Ma- first name, plus an El- middle.

Margaret Louise, Margaret Lorraine – Marlo Thomas started out life as Margaret “Margo” Thomas, but when she mispronounced her name as a child, it stuck. Thanks to the actress-turned-philanthropist’s fame, we sometimes find Marlo on the list of Margaret nicknames. But using a more obvious Lo- middle might make the nickname even more obvious.

Margaret Lux, Margaret Lucia, called Marilu – Marilu Henner was born Mary Lucy. Again, any Mar- name and Lu- name leads to Marilu as a short form. I can’t decide if Marilu feels delightfully retro or slightly dated. But I do think EllaRee and Marilu work together as sisters names.

Nora Emmeline, called Noemi – In several European languages, Naomi becomes Noemi. It’s never short for a longer name, and yet, I can imagine shortening something like Nora Emmeline to Noemi.

Rose Millicent, called Romilly or RoMilly – Another favorite! Like Ellery, Romilly is a sometimes-heard surname, and very occasionally, a given name. It could easily come from Rose – or any Ro- name, plus any name with a strong Mil- sound. Other combinations like Rose Amelia and Rosalie Matilda come to mind, too.

Genevieve Anouk, called Gianna or Vienna – I feel like Genevieve ought to work, with all of those strong sounds – but I’m not quite sure about these combinations. Still, I can imagine sisters named Eloise and Genevieve, so I think it’s work considering if it works in some combination.

Vivienne Odette, called Viviette – I keep feeling like there must be an opportunity to use an -ette ending here, but I’m not sure if Viviette is the best possible suggestion.

Lorelei Alice, Lorelei Arwen, called Lola – Lorelei could shorten to Lola on its own, but add an A middle name, and it feels more obvious. A bonus: Eloise and Lorelei seem equally romantic and elaborate, without being quite frilly. So I think they’re very well matched.

Oh, I could go on – and on! But I think my favorites so far are EllaRee and Annavieve (or AnnaVieve?), plus the Romilly, Lola, and Lilou combinations.

I know the community will have some amazing suggestions, so let’s turn it over to them.

What would you name a sister for Eloise Rhiannon “EllaRee” with a similar first + middle = nickname formula?