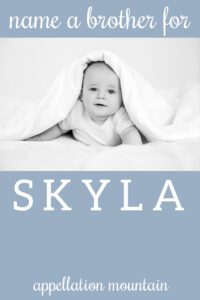 We are expecting our second child this spring–a boy!

Our daughter’s name is Skyla, and we absolutely love her name. We especially like that it is feminine but a little spunky, and unexpected but easy to spell and pronounce.

For some reason, boys’ names feel so much harder! We are looking for something with some of the same qualities we like in Skyla; that is not too common, but that still easily registers as a “real” name. Another reference to nature would be nice, but is not essential.

Our last name is long and begins with “Dan” so names that end in D or N won’t work. Unfortunately, that seems to limit our options considerably (for example, Jude and Boden would otherwise be some of our favorites). Can you offer some ideas to add to our list?

Thanks so much for your help!

This is a challenge!

Someone can plausibly say “I’ve never heard the name Skyla before.” And yet, it’s immediately familiar, with an intuitive spelling and pronunciation. That is quite rare!

But there’s a second quality to Skyla. It’s fresh and modern.

Skyla entered the US Top 1000 in the late 1990s. It was pretty much given to zero girls until sometime around the mid-1950s. There’s history, yes – but we had to get names like Kyle and Kyla and Skye and Skylar for Skyla to fit right in, and none of those were especially well known prior to the mid-century.

I wonder if we’re looking for a newer name? Or at least one that wouldn’t have been familiar say, circa 1750? That doesn’t necessarily apply to Jude, exactly, but I think it captures Boden well.

A BROTHER FOR SKYLA

An action verb, Dash feels like a name thanks to Dashiell Hammett, author of many a twentieth century detective novel. It’s also – appropriately – the name of the older son in The Incredibles. Factor in our affection for (Johnny) Cash and Nash (Bridges) and Dash is a natural pick for a twenty-first century son.

Strictly speaking, Heath is a nature name. But in the US, it’s not exactly a part of every day speech – not like River or Star. (Or Sky, come to that.) It’s ranked in the US Top 1000 since the 1960s, picking up steam around the time Heather took off for girls. But Heath never quite caught on, which makes it feel instantly familiar, but not at all common.

Author Aldous Huxley – from the famous British family accomplished in all manner of endeavors – puts this name on parents’ radar. The middle X makes it effortlessly cool. It’s not exactly a nature name, though -ley does refer to a woodland cleaning. (Just like in Ashley, Hailey, Kingsley, and more.)

Again, Leif isn’t actually a nature name. It looks like leaf, and it’s often pronounced that way, too. But it’s originally a Scandinavian import. Leif rhymes with safe. It means heir.

A straight-up nature name that’s rugged but wearable  – and while it ranks in the US Top 1000, it’s not exactly Liam. Or even River.

Leo could be perfect, except I’m guessing you’ve heard a few. Not only does Leo rank solidly in the current Top 100, but so does Leonardo – with lots of Leo names dotting the US Top 1000. Rio, though, the Spanish word for river, offers the same upbeat sound while remaining far less common.

A virtue name rather than one drawn from the natural world, there’s a strength and simplicity about True. It’s timeless and unexpected – an elusive combination!

While Wells is gaining in use, it’s yet to enter the US Top 500. (You’re more likely to meet a Keegan or an Aziel.) It feels traditional-ish, maybe because it’s close to Will. Boys’ names ending with s are having a moment, like Brooks. And Wells brings to mind both the natural world and a general sense of well-being. It’s a name that checks lots of boxes – just like Skyla.

I keep coming back to Dash … except I’m not sure if the alliteration with your last name will be exactly the right amount of repetition or a little bit too much D sound? I do think Skyla and Dash are perfect together. They sound like real-life siblings, but if it turned out they secretly fought crime after finishing their Goldfish crackers and apple juice? I’d buy that, too.

If Dash isn’t quite right, I do like Wells for that not-quite-a-full-nature-name, but clearly-nodding-to-the-natural-world vibe.

Readers, what would you name a brother for Skyla?