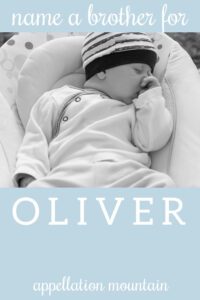 Our second son is due in November, and I’m trying to find a name we can agree on.

Our last name is like the H in HP computers (no relation!) so we can’t use names ending with T, and probably wouldn’t use an H first name, even though I do like Hudson a lot.

My maiden name, Anderson, is Oliver’s middle name, and we’re thinking of using it for all of our children.

Our girl name is Eliza. It’s been my favorite since we first found out we were pregnant, and we might still use it, so we probably don’t want another E/El name.

Besides hopefully not being too popular, I want our son’s name to have one spelling/pronunciation. Brianna shouldn’t be a problem, but people do say it lots of different ways, and I feel like it’s awkward to correct someone, but equally weird to let them say my name wrong. Let’s not even talk about spelling, LOL!

My husband likes Jack, but we already know way too many Jacks, so I just can’t.

Popularity is tricky. Sometimes you can choose a Top 100, even a #1 name, and go years without your child sharing. Other times, you’ve picked a relatively obscure name, but surprise – your kid is one of two Denvers or Alfreds or Wrenleys in swim class.

Since it’s on your mind, I’m going to avoid suggesting Top 50 names. Will it avoid every chance for duplication? Not at all! But it lowers the odds.

The whole one spelling/one pronunciation thing is tougher than it seems, too. I know the mom of a Jackson who was truly, truly baffled when she was asked to spell it. And we’ve all heard our names pronounced in ways that surprise and then some.

On the good news side? This limits your list rather nicely!

A BROTHER FOR OLIVER

Maybe Caspian is a little too different? But I like Oliver and Caspian as brothers, two long names that feel current, but rooted in the past. One hesitation: Caspian Anderson H-like-the-computers is kind of a mouthful.

If Hudson is close, but not quite, maybe Griffin? My first thought was actually Finn. But I wonder if an extra syllable makes it slightly more appealing?

A gemstone name that ranks solidly in the Top 200, but still feels relatively uncommon.

Joe is the ultimate everyman name, but Jonah takes it in a less expected direction.

Maxwell might end up answering to Max. I’m not sure if that’s a plus or a minus, but I do love the L-ending of Maxwell with your middle and last name choices.

The most popular name on this list, Miles is the kind of name we all hear – but maybe one that will repeat less often than Oliver (or Liam or Benjamin).

One of the reasons I like Miles so much is that the ‘s’ ending really flows with Anderson and your surname. But if Miles is a little too familiar, maybe Wells works instead?

Like Miles, Xavier ranks in the current US Top 100. But it’s less common than those chart-topping names, and really – nothing else sounds quite like Xavier.

Overall, I keep coming back to Miles, but Jonah is growing on me, too. I think the ending sound is so important here. Other ‘r’ ending names risk sounding too close to Oliver, and some ‘n’ enders conflict with Anderson. Factor in the need to avoid ‘t’ sounds – and probably ‘d’ ending sounds, too – and it does shorten your list quite a bit!

That said, focusing on boy names ending with s or maybe a vowel sound could be the key, I think.

Readers, what would you suggest as a brother for Oliver?