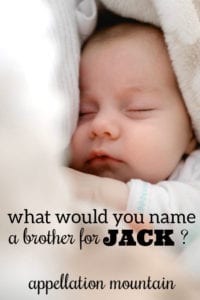 We have a sweet 2 year-old named Jack Murray. It’s the only name my husband and I agreed on. Now we’re expecting another son, and we can’t agree on anything.

Our last name is long and German, so names like Sebastian and Nathaniel don’t sound right.

Murray is a family name. We don’t really have a second family we agree on, but we’ve talked about Harris, Lansing, and Purcell, or maybe William or Gordon.

My list: Grayson, Elliott, Sawyer, maybe Miles, Parker, or Levi. Most of these were on my original list three years ago with Jack, too.

His list: Benjamin (too long with our last name, even though Ben sounds good with it), Luke (too much like Jack), Thomas, David, Matthew, Adam, Joseph (don’t want to repeat initials), Paul (his favorite, but just not for me).

Is there something we’re not thinking of?

Finding the middle ground between two naming styles can be tough! But you’ve done it once, with Jack’s name, and I’m confident we can help you find the right name for your new son, too.

It sounds like your tastes run a little more contemporary, while your husbands prefers his names a little more classic. But there’s plenty of overlap in those two categories.

Do you have a definite idea about nicknames? It sounds like Ben could please you both, but maybe you dislike Benjamin with your surname – or maybe you’re just not wild about nicknames in general?

You mentioned Grayson; it’s a name I might’ve suggested if it weren’t on your list already. And Luke is great, but I agree – it’s just too close to Jack.

Take the surname appeal of so many names on your list, mix it with Benjamin, and Bennett feels like the inevitable outcome. I love it with Jack.

I suppose Cole strikes me as a match for Jack because they’re both related to more traditional names. Jack evolved from evergreen John; Cole, at least in some cases, developed from the middle syllable of NiCHOLas.

I’m guessing you might know a Drew or two; it’s been around for a while. But I think that’s part of the reason it sounds like a brother for Jack.

Jack is a brisk, upbeat name worn by more action heroes than I can count. (Think Bauer, Reacher, Sparrow …) Finn belongs to a hero from Irish legend. It has the same brief, but complete sound as Jack.

I’m guessing Hayes might be more your style than your husband’s, but I’ll suggest it anyway. It’s short and upbeat, an energetic name with plenty of history and contemporary style.

Owen has history galore, but it’s a contemporary favorite – which makes it just like Jack.

I feel like your husband might be more of a Theodore guy, but Theo – just Theo – has a lot of modern spirit, combined with classic roots.

With an X and a V, Xavier scores high in Scrabble. It’s an effortlessly cool name that could be a great match with Jack.

Overall, my favorites are probably Owen and Cole. Though really, I like every name on this list SO much for your family. I’d probably go with Owen Lansing.

Readers, what would you suggest as a brother for Jack? 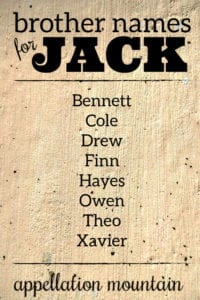