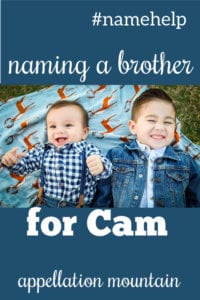 We named our first son Stephen Cameron, but call him Cam. Stephen is my father-in-law’s name. I really didn’t like the name, didn’t like the idea of family names in general, and I still find it frustrating when he’s called Stephen instead of Cameron or Cam.

Cameron was my choice, though, and I still think it’s a great name that suits our son perfectly. If we’d gone with Cameron Stephen, I think I’d like the name better, but my husband insisted Stephen come first.

Our last name sounds like Willis with a T.

Now our second child is due in a few months, and I find myself wanting to use a name from my side of the family. Maybe that’s not fair, because I really didn’t like the idea with Cam. But having used one for our first child, it feels like it’s my turn.

My dad’s name is Wayne, which I really only like as a middle name. My husband is arguing for Andrew Wayne – Andrew was what he wanted for Cam. I like Jackson/Jack, Nathan/Nathaniel/Nate, Owen, Benjamin/Benji/Ben, and Hayden/Hayes. Andrew feels kind of old-fashioned to me.

The only other name my husband likes besides Andrew is Matthew, but I think Matt would be confusing with my name.

He says that, since I chose Cam, it’s his turn to decide. But I feel like I really let him have his way with Stephen, so I should be more say this time.

How exciting to be welcoming a second son!

I feel your frustration. Most of us have been there! We have a great name our partner just won’t consider, or a personal favorite that only gets used as a middle, or a family name we give into because … well, you get the idea.

Compromise is a big part of parenting, and it’s absolutely an essential part of naming.

It sounds like you compromised nicely on your son’s name. (Though I tend to agree that Cameron Stephen might have been a more practical choice.) It’s a name your husband felt strongly about, combined with a name you love best – and your pick is the one used daily.

Which makes Andrew Wayne seem like the logical name for your second son.

It’s a name rich with meaning for you, combined with a choice your husband prefers strongly for daily use. Would you call him Drew? Because Cam and Drew sound very much like brothers to me.

It feels like your argument is that you compromised more for your first son’s name, and so your husband should compromise more this time. I get that. But I don’t think it necessarily means you get to choose Benjamin or Jackson this time around.

If Andrew really isn’t a name you can live with, then I’d propose that you put both lists aside – his two-name list, as well as your slightly longer one – and start fresh.

I’ll make just a few suggestions that feel like they’re in the same ballpark as Andrew, Cameron, Benjamin, Jackson, Nathan, Hayden, and Owen:

Hunter – What do you think of an ends with -r name? There are oodles of them. I put Hunter on the list, but Carter comes to mind, too. (If you don’t mind your boys sharing an initial.) Or maybe Asher, Archer, or Walker?

Levi – Levi doesn’t sound much like anything on either of your lists, but if you’re stuck, maybe it’s time to go a different direction? I like Levi and Cameron together quite a bit.

Jonathan, called Jon or Jack – If your husband isn’t gung-ho on Jackson, I wonder if he’d be more interested in Jonathan? It sounds slightly more traditional, plus it’s long like Jonathan. It shortens to Jon or Jack, which is on your list.

Theodore, called Theo – Matthew and Andrew lean a little more traditional, as does Theodore. But Theo is bright and modern. Would it be another great compromise?

William – Then again, maybe a more traditional name that you like would appeal? The alliteration of William Wayne appeals to me, but there are certainly plenty of traditional boy names to consider.

I think lots of couples get stuck at moments like this. It feels like our partner’s preferences carried more weight when naming their first child, and it makes us anxious for a bigger say the second time around. (This was certainly true for me!)

Some couples do agree to alternate. My own parents did. But even so, there was a certain amount of compromise in their decisions.

And most of the time, we have to find mutual agreement. So hard! But worth it.

What what you suggest as a brother for Cameron? And how have you resolved compromises on names in your relationships?