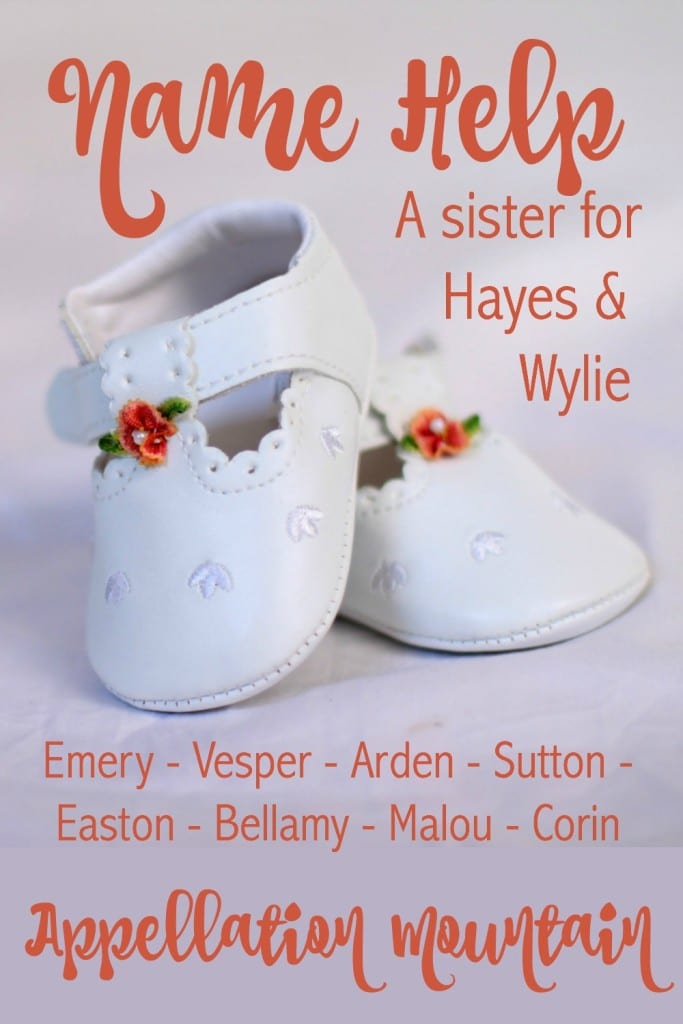 Name Help is a series at Appellation Mountain. Every Saturday – and some Mondays – one reader’s name questions will be discussed.

Cally has two sons, Hayes Andrew and Wylie Daniel, and is expecting a daughter this summer! She writes:

I have the hardest time picking baby names!

I like strong, short names and it seemed that most of the names I like for my oldest two were surnames.

I am obsessed with the Social Security names list and I check every name on there to make sure that it hasn’t been rising too quickly.

Picking a name that isn’t going to be silly one day or make her sound old worries me! So far, the names that I like are Harlow, Shiloh, and Greer. Harlow seems to be more popular these days as well as it having the same problem Shiloh does – our last name starts with Lo.

I just love the name Greer! Its short, strong, uncommon but not unheard of. The only issue I see with the name is people not understanding what I am saying. Greer is pretty uncommon so that I could see it being an issue at first.

With my two boys, I used family names for the middle names. With this one, I am not dead set on a family name. My grandmother’s name is Marie and my other grandmother is Elizabeth.

I would love to hear what you think!

Congratulations on your new daughter! I agree with you completely. Since your surname starts with Lo, all of those lovely -lo ending names are out.

The good news is that Greer is perfection. It meets all of your criteria, and Hollywood’s Greer Garson makes the name feel just feminine enough. Brooke Shields has a daughter called Grier, and there’s also Greer Grammar, daughter of Kelsey, and an actress in her own right. Hayes, Wylie, and Greer sound great together.

I do think you’ll encounter more misunderstandings with Greer than with Hayes or Wylie. That’s true of any unfamiliar name, and even the most common names are misheard. (Addie? No, Abby! Oh, Maddie …) But since you’re not completely certain, it’s worth looking for substitutes. There may be something slightly more familiar that still hit all the right notes for your daughter’s name.

We’re looking for a name with a tailored style that’s unexpected but not too unusual. Would you consider:

Emery – The thing about surnames is that very few are truly, completely gender neutral – even though a great many names work equally well for boys and girls alike. Emery ranks in the current US Top 1000 for both genders, but trends feminine, probably thanks to fellow Em- names Emma and Emily. I put Emery on this list because it almost picks up the sound of your family name, Marie. The only drawback? It’s in the current Top 200 for girl, which might feel a little too popular, especially factoring in all of those Em- names. But I think Hayes, Wylie, and Emery sound just right together.

Vesper – Surname names like Harper and Piper might be options, if only they weren’t so popular! But then there’s Vesper. Vesper is a study in contrasts. It’s the name of a Bond girl – Vesper Lynd – but it’s also the name of an evening prayer service – Vespers. I think the night sky reference is the best of all, and it’s the original, too – in Latin vesper means the evening star, or simply the evening. It’s an unusual name, but an interesting one that’s just as tailored as Greer.

Arden – While we’re thinking of names that are tailored with subtle ties to the natural world, Arden always comes to mind. It’s literary, too – while there’s a real place by the name, Shakespeare’s Forest of Arden is more of a fantastical creation. The sound isn’t specifically feminine, though I think Elizabeth Arden – the cosmetics and fragrance company – makes us perceive this one as feminine.

Corin – While we’re thinking of two-syllable, ends-in-n names, I wonder what you might think of Corin? Cora names are having a moment, with choices like Cordelia and Coraline following the rising Cora up the popularity charts. Strictly speaking, Corin is masculine – but with Corinne so familiar for girls, I think this one works. (I’d rhyme Corin with Lauren and soarin’ … which is a different emphasis from Corinne.)

Malou – While ends in -lo names conflict with your last name, ends in -lu names could work. Malou is a French smoosh of Marie and Louise. Because it’s very much a nickname, it might not feel substantial enough for you – but I think it works. Another similar French name is Lilou, which has been wildly popular in France in recent years.

Sutton – Here’s a name that feels much more familiar: Sutton, a current Top 1000 choice for girls. The marvelous Sutton Foster is currently starring on TVLand’s Younger, and that’s probably why Sutton is currently in the girls’ Top 1000 and rising. I think it feels just feminine enough to be Hayes and Wylie’s sister, and the three names sound great together: Hayes, Wylie, and Sutton.

Easton – This name is very popular for boys – it’s in the current Top 100 – but heard occasionally for girls. With names like Emerson and Ellison in use for girls, Easton works, too.

Bellamy – I’ve saved one of my favorites for last. As I was working on the images for this post, I noticed that Hayes and Wylie both include the letter ‘y’, as does Emery. And Bellamy. Bellamy leans feminine because of all the Bella names in use today, and while it’s not very common, I doubt you’d have difficultly getting others to recognize it. In also feels like a girls’ name because we recognize Bethany as feminine.

Having gone through lots of possible suggestions, though, I still find myself drawn to Greer. It could work in the middle spot as well as the first: Emery Greer and Bellamy Greer are lovely.

But since your sons both have family middles, I do think Marie or Elizabeth would be great for a daughter. Or maybe even a smoosh of the two – Marielle, maybe? Greer Marielle might be my favorite from all of the possibilities so far!

Readers, I know you’ll have some great suggestions for Hayes and Wylie’s sister. Should they use Greer? Or is there another name they should consider?