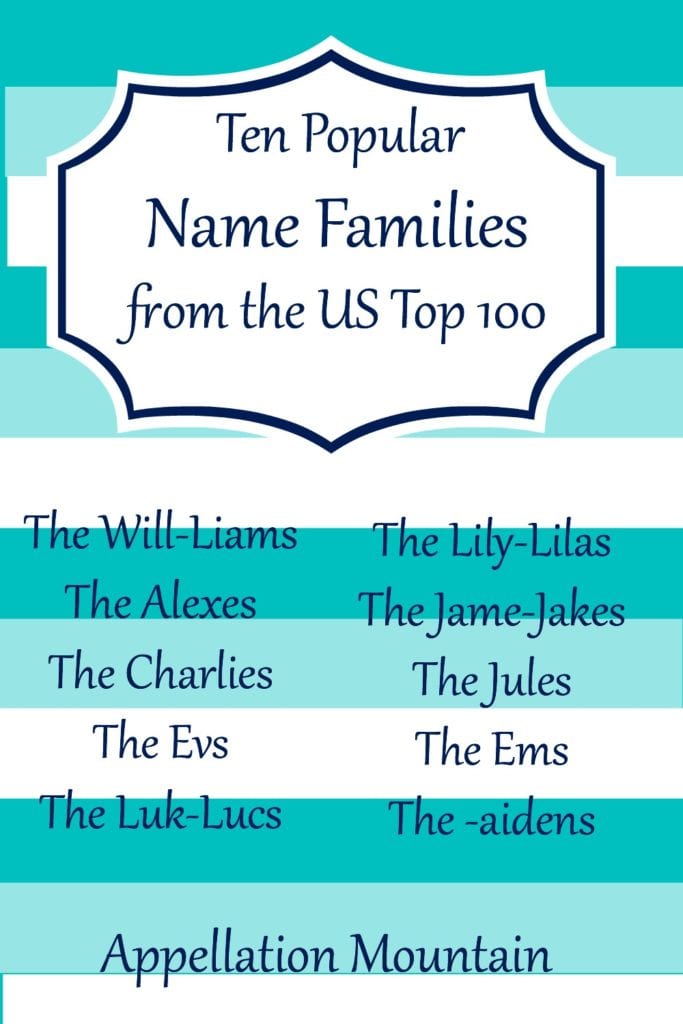 I have a long-standing fascination with name families.

With what, you ask?

Name families: clusters of names that share a common root, or maybe a sound.

Look at name data long enough, and name families leap out of the lists. But they don’t all behave the same way.

I realized that while I think about this often, I realized that I’ve never talked about it. Here are ten name families that always catch my eye when I look at the Top 100.

Why do they matter?

It’s impossible to ignore this name family for two reasons.

First, both Liam and William rank in the current US Top Five. Evergreen William and upbeat, Irish Liam might appeal to different parents, but there’s no question that they’re nearly the same name.

On the girls’ side, Willow comes in at #111. Strictly speaking, the nature name isn’t related to William and company. But it works as a feminine twist on Will- names, and because actor Will Smith named his daughter Willow, the connection is even stronger. Willa, currently charting at #481, is a more conventional member of the clan.

For the most part, the Will-Liams appear to have risen in sequence, with William pulling up Liam, Willow, and the others.

I keep the Alexes close to my heart. We chose Alexander for our son’s name, inspired by his grandfather. Long before I’d met my husband, Alexander and Alexandra struck me as classic, nickname-rich options that would wear well.

Of course, I’m not alone. Alexander currently ranks #8 in the US, and has been popular for years. I’ve even brainstormed creative nicknames in case you’re an Alexander feeling like one in the crowd!

Other members of the family include:

As I mentioned above, the male members of the Alexes family have caught on even as the feminine forms have faded slightly. At present, the most popular on the girls’ side is #32, Alexa, followed by Alexis at #86. Alexandra – godmother to elaborate 2016 choices like Olivia and Isabella – has fallen to #101. Alexandria stands at #213 and Alexia at #318. Nicknames Lexi and Lexie come in at #308 and #713, respectively.

I think this might be the hottest of the name families right now.

Credit the regal and sophisticated Charlotte, currently the #9 name for girls in the US. Or maybe Charlie, friendly and approachable, and currently popular for boys (#229) and girls (#207). And we can’t leave out evergreen Charles, still standing at #50, or Caroline, via the Latin form of Charles, Carolus, ranked #82.

Are the Evs really a name family, or just a coincidence based on our love for the letter V?

I can’t decide, and yet, I also can’t deny that names starting with Ev are having a good run.

Additional Ev name possibilities abound, especially for girls. There’s no question in my mind that Ev names are having a moment, and whether you prefer the more restrained Evelyn or the exuberant Everleigh, it’s part of the same trend.

I’ve already mentioned the Luk-Lucs, and the many forms of Luke that qualify.

In this case, traditional Luke – bolstered by the 1977 introduction of Star Wars hero Luke Skywalker – was clearly the name that came first. And it’s still on top, at #28 and rising as of 2015.

As for the rest of the family:

Between Lucas, Luke, and Lucy, this name family might be even more familiar than the Will-Liams.

I’ve had my eye on the Lily-Lilas for a while. Depending on how many distant cousins you include, this name family could be the feminine equivalent of the -aidens. But let’s keep it simple, and just talk about Lily and Lila, two unrelated names that are so close it’s tough to not see them as linked.

For the most part, this is a name family that’s falling in use, but the sheer number of Lil- names in the current US Top 100 – and Top 1000 – make it hard to ignore.

That’s without counting Delilah, Lola, or any of the Laylas. Simply put: the l-l sound remains a powerful force in naming girls today.

Many people wouldn’t blink if they met brothers named Jacob (#4) and James (#7). But onomasts know that they’re close cousins, both ultimately derived from the Greek Iacobus. (Which became Iacomus in Late Latin and … well, there’s a lot there.)

So while I hesitate to call them part of the same family, there’s no denying the shared DNA.

There’s something else the names have in common: by 2016 standards, they’re both rock solid boy names.

They make the name families list because they represent 1/5th of the Top Ten. Other related names include:

I came thisclose to giving this spot to John, which still might be the most influential name in the US.

But at the last minute, I switched John out for the Juls. Because while we tend to think of John as popular and influential, the Juls names are more of a surprise.

The trend is unmistakable. The current US Top 100 includes Julian at #45, plus Julia at #89. They’re steady, stylish, and yet slightly under the radar.

The rest of the Top 1000 includes more members of the Juls family:

Add it up, and the Juls are hiding in plain sight.

If the Evs make the list, why not the Ems?

You can argue that Emma (#1) and Emily (#8) aren’t related. Strictly speaking, they’re not. But it’s difficult to think of them as completely separate when they’ve shared the Top Ten together for so many years. (Since 2002 if you’re counting.)

No surprise, then, that other Em- names have followed:

That’s quite the powerful name family.

And now we come to the -aidens. It’s a trend that drives some parents batty. And yet, at the same time, it appeals to a great many parents, too.

As Kelli’s analysis for Nameberry demonstrates, peak -aidens is almost certainly in the past. (She puts the year of Peak Aiden at 2008.)

A total of 31 rhymes-with-aiden names appear in the current US Top 1000, including:

Which name families are your favorites?