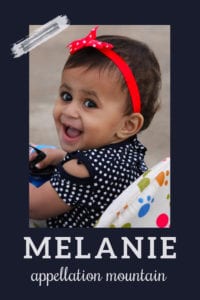 The baby name Melanie might sound like a twentieth century innovation, but it’s actually rich with centuries of history and meaning.

Thanks to Kyla for suggesting our Baby Name of the Day.

Back in the 300s and 400s, two influential women answered to the name Melania. It’s Latin, from a Greek word meaning dark.

But these women were the very opposite of darkness.

Melania the Elder was born in Spain, then married and moved to Rome, all in the 300s. She enjoyed significant wealth during her lifetime. But ultimately, she opted to use it to protect and promote her adopted faith. After converting to Christianity, she supported churches and monasteries across the Christian world. Later in life, she built a convent and retired there.

Her granddaughter, Melania the Younger, bears her name and her devotion to faith, service, and religious life.

Both women are considered saints.

And in French, it became Mélanie.

French and English families used it in the Middle Ages. It’s said the Normans brought it to England. (Though the Dictionary of Medieval Names from European Sources first lists the name in England in 1580.)

But it would take many more years before the baby name Melanie became mainstream in the US.

GONE WITH THE WIND

When we talk about Gone With the Wind, the names that come to mind are Scarlett and Rhett. But the problematic bestseller actually boosted the baby name Melanie even more.

If you don’t know your sugar-coated romance novels of the Old South, here goes:

Fiery and flirtatious Scarlett pines for her neighbor, Ashley (yup – back when Ashley was a boy’s name) Wilkes. They’ve grown up on neighboring plantations. But Ashley’s family comes from traditional Southern roots, and they “always marry their cousins.” Scarlett’s family is rich, too, but they’re newcomers. Enter Melanie Hamilton. She’s the good-as-gold cousin-turned-wife of Scarlett’s unrequited love. In a fit of pique, Scarlett accepts the proposal of Melanie’s brother, Charles, making the two women sisters-in-law.

Much of the movie ends up being about their relationship. Scarlett risks everything to help Melanie deliver her son during the Civil War. And Melanie, in turn, is fiercely loyal to her sister-in-law – even when she doesn’t deserve it.

The novel Gone With the Wind came out in 1936. The blockbuster movie followed in 1939. It’s not clear where Margaret Mitchell found either character name, but she was a daring namer.

In 1930, just thirteen girls were named Melanie. (Along with fewer than five named Scarlett.)

Scarlett didn’t take off as a given name – not really – until Scarlett Johansson become a household name in the early 2000s.

Melanie became a 1970s and 80s favorite, though it peaked at #42 in 1972. So while Melanie keeps company with Melissa and Jennifer, Jessica and Nicole, it’s not quite as time-stamped as those more popular names.

Of course, pop culture gives us a famous Melaine or two.

Actor Melanie Griffith started her career while still a teenager in the 1970s, and earned an Academy Award nomination playing Tess McGill in 1988’s Working Girl.

Others followed, including two Spice Girls, plenty of actors, and many women of note.

If it was a Hollywood name, born of a bestseller, boosted by a pop singer and a celebrity, the baby name Melanie quickly shed those origins.

The long history of use means two things: first, Melanie reads like a modern favorite. It’s less current than Everly, but less vintage than Dorothy. It balances on a midway point, neither trending nor traditional.

But it also means that Melanie hits a sweet spot for many parents: everyone recognizes it, and can easily spell the name. And yet, a Melanie born today will rarely share it with other girls her age.

There’s also something of a halo around Melanie. Maybe it’s the double-saint backstory, or maybe we still associate it with self-sacrificing Melanie Wilkes, but this is a student-body-president kind of name.

If you’re looking for a name that feels instantly familiar, but not as buttoned-down as the classics, then the baby name Melanie could satisfy.

Would you consider the baby name Melanie for a daughter?