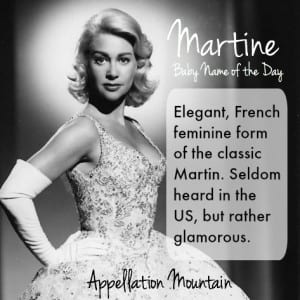 Looking for a sleek, tailored, and unexpected name for a daughter?

Thanks to Lindsay for suggesting one that fits the bill. Our Baby Name of the Day is Martine.

Martin is a classic, worn by the Reformation’s Martin Luther, and his namesake, civil rights leader Martin Luther King, Jr.

It comes from the Roman god of war, Mars. Saint Martin, a generous fourth century bishop and patron saint of France, is a big reason that name has been widely popular.

In the 1950s, this name was huge in France. It shot to the #2 spot, right behind the evergreen Marie. But it faded almost as quickly, and now a Madame Martine is probably more grandmaman than bébé.

The name’s popularity might be due to the French answer to Marilyn Monroe: blonde, beautiful Martine Carol. Or possibly thanks to a series of children’s books, first published in 1954, about a little girl by the name.

It’s also Dutch – though in that case, Martine is pronounced more like Martina.

Martina is a more familiar form in the US. Some of that is thanks to Czech-born tennis player Martina Navratilova.

But not all – Martina has a long history in the US, as a logical feminine form of Martin. Saint Martina, martyred in the 200s, is a patron saint of Rome.

Navratilova gave her name new life. As she dominated tennis courts in the 1980s, her given name rose from the 800s to the 600s.

There’s also country music’s Martina McBride, but despite her musical success, Martina hasn’t cracked the US Top 1000 since the year 2000.

Marta and Martha are different names with New Testament roots, but they sound similar – and they’re equally stuck in style limbo. Marta last charted in the US Top 1000 back in 1986, and Martha – despite her original First Lady status – ranked a chilly #803 in 2013.

And was gone by the following year.

What persuaded over 200 parents to give this rare name to their daughters?

Let’s call it a mystery.

And yet, overall, Martine feels like the kind of completely unexpected name that could wear exceptionally well in 2015.

Tailored and simple, feminine but frills-free. It’s classic with a long history of use, a quirky 80s-era pop song, and just enough notables by the name to make it feel familiar.

What do you think of Martine? How would this name wear in 2015?