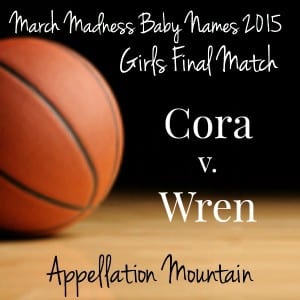 The boys’ final round of #marchmadnessbabynames opened earlier today, and now it’s the girls’ turn!

The semi-finals played out similarly for the boys’ and girls’ contests. In both cases, the winners were clear, some of the names have been here before, and while it wasn’t surprising to see the outcome, I really felt like it could have gone either way.

So what happened last week?

That’s enough chatter about the semi-finals. Time to choose the 2015 champion. Please vote!

Voting remains open through the morning of Friday, April 3rd. The winners will be announced on Saturday, April 4th. Happy voting!