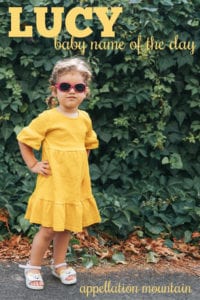 Lucy topped the charts one hundred years ago – and is back on top again today.

Thanks to phancymama for suggesting our Baby Name of the Day.

Sometimes we dismiss Lucy as a nickname. Only it isn’t so. In medieval English, formal, Latin names co-existed with vernacular versions. Cecily evolved from Cecilia; Margery from Margaret. (The Marjorie spelling? That’s courtesy of marjoram, the herb.)

Translating back and forth created a handful of entirely new names. Nigel, for example, evolved from Neil, in a complicated game of whisper-down-the-alley. And James wandered down many a path as it became the classic choice we know and love. But mostly, we find winners and losers. Cecily and Margery have fallen out of favor. Mary long outranked Maria – though that’s no longer so.

But Lucy outpaces the Latin Lucia from which the name emerged.

Lucia comes from Lucius, a Roman given name derived from lux – light. Lucius appeared in the ancient world, on prominent Romans and a minor New Testament figure. Popes – three in total – took the name. And Lucia was heard early days, too. There’s a fourth century saint from the era of the Diocletian persecutions of Christians.

More recently, in the 1920s, author EF Benson published the Mapp and Lucia stories, detailing the misadventures of two dear friends in their small English village.

But Lucy feels most English, while Lucia belongs to the romance languages.

CS Lewis chose the name for the youngest of the four Pevensie siblings in The Lion, the Witch & the Wardrobe. The Narnia books eventually make her Queen Lucy the Valiant. That feels like an inspiring reason to consider the name for a daughter.

Other famous characters include:

In the 1950s, Lucille Ball became a household name. A model turned chorus girl, she found success playing a ditzy housewife named Liz on the radio. It inspired her to play Lucy Ricardo, alongside real-life husband Desi Arnaz, on I Love Lucy. She fought to do the show her way, taking an early version of it on the road as a comedy act. Only after its success did CBS agree to move forward with the series.

The show debuted in October 1951, and occupies a place in American pop culture history.

Not only because the show remains beloved, all these decades later. Ball achieved many a first. As co-owner, and later owner, of Desilu Productions, she became the first woman to run a major television studio. When she needed rest after her second pregnancy, her show introduced the entire idea of re-runs. (They proved wildly popular.) She scored several Primetime Emmys and dozens of other awards.

Her daughter shares her name, too – though they spelled it Lucie.

Some dismiss it as a nickname, but like Mary, it’s brief and complete.

But it could be short for a longer name, too. There’s Lucille, obviously. And:

I’d call the name preppy and polished. Literary and gutsy, but still antique and sweet. It’s a good girl name with a lot of spirit, a sister for Charlotte and Alice, an alternative to Lily. The name works for a child or an adult, an artist or a senator. Given the name’s popularity, odds are that it will be worn by both.

What do you think of Lucy? Do you prefer it as a nickname, or on its own? 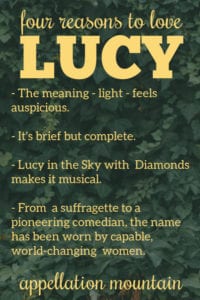