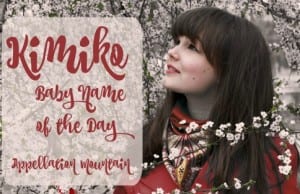 Kimberly has had a long run as a popular girl’s name, and royalty-inspired baby names are on the rise today.

Put them together, and you’ll have our Baby Name of the Day: Kimiko.

Kimiko: Made in Japan

Kimiko is a Japanese name. You might recognize the -ko ending shared by names like Akiko. And there are a handful of uses of the name that might be vaguely familiar, even to Westerners who have never travelled farther east than Prague.

Way back n 1935 movie called Kimiko, which seems to have been a romance. Even earlier, Lafcadio Hearn published a series of essays called Kimiko.  His Kimiko is a beautiful geisha.

I’m not sure how popular this name would be today. I’ve heard that -ko endings are considered old-fashioned in Japan, but one of the most popular names for girls is Riko, so maybe not. Or perhaps Kimiko feels nicely vintage, Japan’s answer to Esther.

Now, about the kanji – the characters – used to write the name. The first part – kimi – translates to empress, or perhaps noble. The ending -ko is familiar from girls’ names like Akiko and Yukiko. It means child.

The royal meaning might appeal to parents in our age of Kingsley and Reign. 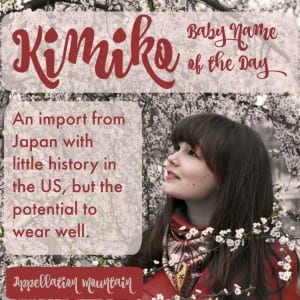 In the US, this makes an obvious choice for parents seeking a Japanese-English crossover, thanks to nickname Kim.

Kim originally comes from surnames like Kimball and Kimberly. There’s some history of use for men – Rudyard Kipling’s 1901 novel Kim was about a boy named Kimball O’Hara. But in the US, Kim is usually Kimberly, and overwhelmingly feminine. It became a Top Ten choice in the 1960s and 70s, making it the perfect choice for privileged daughter Kimberly Drummond on long-running sitcom Diff’rent Strokes when it debuted in 1978.

There are a few places you might come across this name:

Kimiko: By the Numbers

Back in 1924 there were 40 newborn girls by the name, but the number almost disappeared while the US was at war with Japan. In 1987, there were 46 girls, likely reflecting the use of Kimiko as an English-Japanse crossover name.

Overall, if you’re after a Japanese name that would work well in the US, this could be one to consider.

What do you think of Kimiko? Does it feel like a great crossover name, or are all of the Kim names dated?