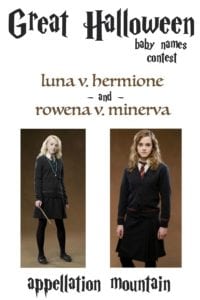 You’re not a Potterhead, you say? No worries. This contest is all about the rich and varied names JK Rowling chose for her characters – the evil, the noble, and everyone in between.

Now for the fans: the contest is limited to the witches and wizards that we know and love from the original seven-books series. (Sorry, Leta and Scorpius!) Some of them are the stars of the show, while others are a little more obscure.

Now, let’s look at the results from the last round:

Remember, we’re voting for our favorite names – not necessarily our favorite characters. But if they happen to be one and the same? That’s just fine!

Witches of Harry Potter Round of Four: Luna v. Hermione

How can we choose between these two? Luna is leaping up the popularity charts, ever since we met the offbeat witch who instantly takes Harry’s side in the battle of good versus evil. But Hermione has always been a steadfast ally, too. Her mythological moniker isn’t one often heard – but thanks to Miss Granger, we all know exactly how to say it.

Witches of Harry Potter Round of Four: Rowena v. Minerva

Two women with history aplenty at Hogwarts, one of the school’s founders, and one of the school’s saviors. Both names are rare on children today, but there are plenty of reasons to think they could make a comeback. After all, nature name Rowan is wildly popular, and Minerva’s Greek equivalent, Athena, is catching on.

This round will remain open until Thursday, October 25th. Check back on Saturday, October 27th for the final round. And the winners will be announced on Halloween 2018!