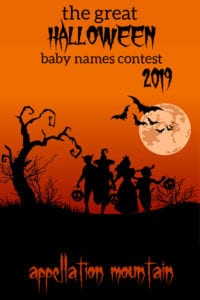 The Great Halloween Baby Names Contest 2019 has arrived! This year, we’re pitting the names of Vampire Diaries characters against each other.

The series featured, obviously, plenty of Dracula’s kinsmen. But witches, werewolves, and other creatures appeared, too, along with the occasional mere mortal. (If there’s any such thing on a show so soaked in supernatural goings-on.) If you’ve watched the series – or read the original post – you’ll know that the show is actually a series of three, the original, plus two spin-offs. Legacies is still going strong on the The CW, with the second season debuting this month.

Enough about the show … how ’bout the names?

Like many a long-running series, a handful of rarities have spiked since the series’ premiered. And more have been given a boost, thanks to our familiarity with the characters.

For the Great Halloween Baby Names contest, don’t worry too much about the plot twists of the show itself. You can play even if you’ve never seen an episode.

Just vote for the names you like best – even if they belong to characters you don’t love – or know!

Two lovely, literary names face off. But while Olivia tops the charts, appearances in two hits series have yet to lift Sybil.

Elena is at the heart of the show’s drama, so maybe it makes sense that this name has skyrocketed since Vampire Diaries debuted. The much rarer Sabine just sounds like it belongs on the series, doesn’t it?

Sophie is slightly shorter than the chart-topping Sophia; Georgina adds a syllable to the popular Georgia. But only one can advance …

Both names claim history before the show, but both were boosted by their characters. And yet, they’re so on-trend it didn’t take much for parents to embrace these lovely, flowing names.

Two terribly pretty names – the French Camille and Scottish Bonnie – face off in this round.

Here’s a fun contest: the English virtue name Hope goes up against the Slavic Nadia, which means … hope. The names make an optimistic note for series with so much suffering.

Voting remains open until Thursday, October 10th. Check back on Saturday, October 12th to see if your favorites advance – and to vote in the next round!