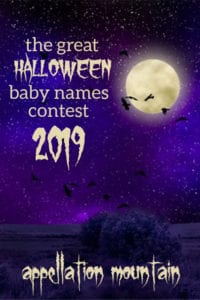 The Great Halloween Baby Names Contest 2019 is here. This year, the names of Vampire Diaries characters are vying for the title of the spookiest, most spectacular of the names.

Of course, you could name triplets after the show’s characters and not necessarily sound like a superfan. (Okay, Elena, Damon, and Stefan? That could be weird.) Because even though the characters were mostly vampires, witches, werewolves, and other things that go bump in the night, their names? Were pretty darn wearable. There’s no Vampirina or Maleficent among them.

If you watched Vampire Diaries during its original run, you probably know that two more spin-offs followed. First came The Originals, followed by Legacies. The second season of Legacies debuts on The CW this month.

But even if you’ve never seen a single episode, please vote along in the Great Halloween Baby Names contest. Even though the names all come from the show, it’s not about loving a particular character. It’s about taking the names from a fictional world, and deciding which ones we love best for real, non-supernatural children.

Which reminds me: I haven’t seen the show! (I know, where are my priorities?) And I realized after I’d chosen the names that I’d left off the two male leads, brothers whose rivalry fuels much of the drama on the original series: Damon and Stefan Salvatore. I don’t have a solid reason for the choice – especially as Stefan is one of those names I’ve always loved. If you think it’s glaring oversight, feel free to mention it in the comments!

But now, on to the contest.

Strictly speaking, the character’s name is Malachai. But Malachi makes for the more popular spelling, and his nickname – Kai – is most popular of them all. As for Lucien, it’s cousin to the wildly popular traditional boy names Luke and Lucas, but remains relatively rare.

Handsome Beau sounds exactly right for a Southern vampire. Except in this series, Beau hails from England. As for Kol, it’s pronounced just like the popular Cole, but reflects his origin story, which stretches well over a thousand years.

Finn sailed from Irish mythology to Glee to Star Wars, with a pit stop in the world of Mystic Falls. No surprise it’s leapt in use dramatically. As for Alaric, it’s also gotten a boost from the series, but has yet to make an impact across pop culture. But in our age of Alex and Dominic, Arlo and Maverick, Alaric fits.

Enzo picks up on our love of o-ending boy names, while Dorian fits with Julian, Adrian, and other Top 100 choices. Both feature in the Vampire Diaries universe, though it’s possible that the destructive Hurricane Dorian will damper the latter’s rise. Both feel storied and familiar, but still undiscovered.

Two names with an imported vibe face off in this contest. First up, Rafael. The angelic name reads Spanish – though the spelling is preferred in several European languages. And then there’s Kieran, an Anglicized spelling of an old Irish favorite.

Like Sybil in the girls’ contest, Atticus crosses from the world of Downton Abbey into the Vampire Diaries universe, making it feel like a name of our moment. Cade, strictly speaking, comes from Arcadius – which shares much with Atticus. And yet, it’s Cade that feels like the more logical name for a child born today.

Voting will remain open through Thursday, October 10th. Check back on Saturday, October 12th to see how your favorites fared – and to vote in the next round!

Image by dawnydawny from Pixabay