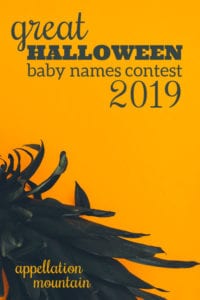 Time for the final round in the boys’ Great Halloween Baby Names Contest 2019!

Your votes have narrowed it down to just two names left. But before we get to the very last contest of the season, let’s take a look back at where we’ve been.

All of this year’s contestants are drawn from Vampire Diaries, as well as the series’ two spin-offs, The Originals and Legacies. But it’s not about the characters; it’s about the names of the characters.

There are dozens of choices, many of which have enjoyed a bump in use thanks to the show featuring all sorts of supernatural goings-on.

You won’t see Damon or Stefan – the vampire brothers at the heart of the original show – in the contest. But you will find two very handsome names that survived to very last match.

Here’s how the final contest shook out:

That means that Rafael and Enzo will compete for the crown in the Great Halloween Baby Names Contest 2019. Both feel handsome and a little bit mysterious, the kinds of names that belong on a series about supernatural drama. And yet they’re not out of place on a modern playground, either.

The winner is up to you!